I was lucky enough to meet Adam Olenius and Ted Malmros for an interview before their gig at the Poolbar Festival in Feldkirch (AT) on the 19th of July. This was the last concert of Shout Out Louds for quite a while.

Indiespect: Yesterday you played at the «On the Rocks Festival» in Grolling. Was it the first time you played there?

Olenius: It was the first time

I: And the last time I think?

O: Oh yeah. They told me, that there is not gonna be any festival. They are shutting the whole thing down. It was a really beautiful mine, but very old they said. So they gonna tear it down. But it was fun. We had a lot of delay, pretty messy. We couldn’t go on stage until 2 o’ clock.

I: When were you supposed to play?

Malmros: 11.30 p.m. or something, I guess. I don’t know what happened. They were slow. They were really slow (laughs).
I mean, everybody was really nice, but everything just took a lot of time.

O: At this weekend, we have an excellent tour manager called Peter Hill and he unfortunately couldn’t come with us. Without him, we are pretty lost. He’s the best and he’s really cool. So this summer we actually only do a few festivals. This is our second summer after releasing Optica, so we tried to get some vacation. But it’s always nice to do a few.

I: That was the first thing I thought. Because I didn’t know if you are already doing a new record or only vacation.

M: No, just vacation. We are starting with a new record later. We’re thinking about it.

M: Yeah. We’re thinking about it and talking and planning. You know, you need to take your time. When we were younger we were kind of 24/7 every day just thinking about it. But now, we have other things to think about and things we like and stuff. There will be another record but it will take 2 years or so.

M: Until the record’s done. It might not be released then. Will you think faster?

O: Yes, I’m gonna be off for four months, but let’s try to make it faster then 2 years, cause then we gonna, you know… We need to do it faster. 2 years.. You know? I mean.. Let’s talk about that, let’s fight about it after this!

I: What I’m wondering. Your music is quite often featured in movies. And in 2010 it was featured in «Happythankyoumoreplease» from Josh Radnor. There was «My Friend and the Ink on His Fingers» in it.

M: Exactly, yes! We still haven’t seen that. I always forget to check it out. We talked about it, that we should definitely check it out.

I: I wonder why he chose this song, because it’s not that well known and he is from America. So do you know he got to this track?

I: Yes, but it’s quite interesting, because it’s seven years after the release and it’s not on the international album.

M: I don’t even remember them asking about using this song. Which they might not have, so. But yeah, we’ll see. We’ll figure it out.

I: I think he’s a big fan of you. He even wore your band shirt in How I met your mother, once.

M: Oh yeah. Is that the guy, that made the film? Okay!

O: I actually met him. That’s quite a fun story. Cause i met him, when we opened up for Kings Of Leon in LA. And he came up to me with his friend and they told me: Oh can we get a t-shirt? And he wanted it for free, I remember. And I was like.. Uhm, that’s pretty rude. You have to buy it like anyone else. But he said, I’m gonna wear it on TV. And I just didn’t believe it, but I said sure… I’ll give it to you.

M: And then he wore it in the last season, because he was like.. Oh I promised this guy, that I’ll wear it. 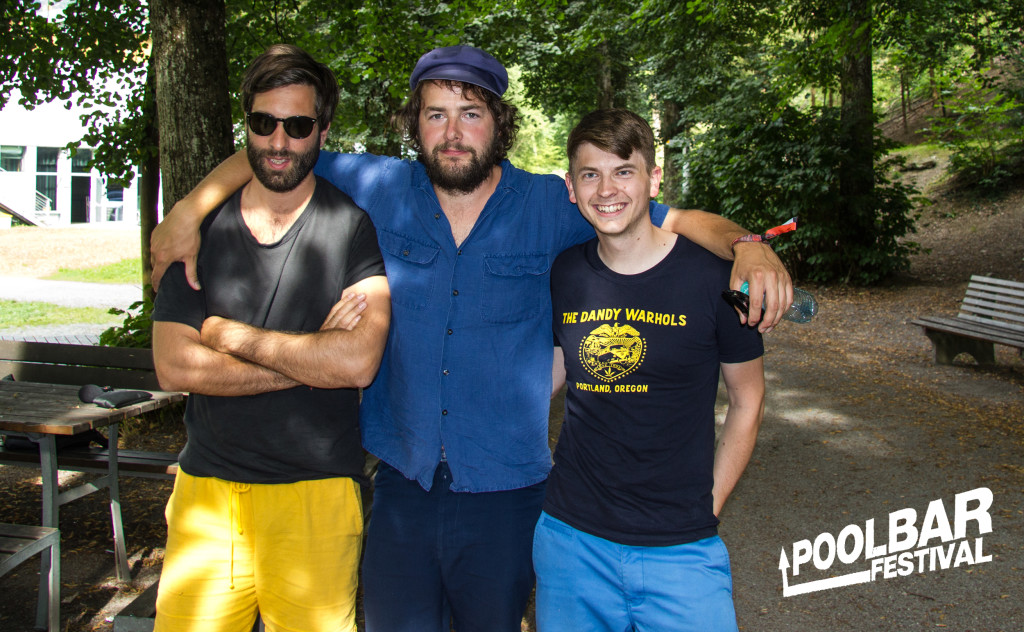 I: The first album you also released in Japan. And you did the video clip for Hard Rain in Tokyo. What is the fascination for bands in general about the Japan market and to make special releases?

M: I know, that the Japanese market always wants special releases and they’re pushing for that. Maybe for people not to import the record. But I mean Japan is an interesting fun, different place.

O: We needed some footage for this song. We really liked that song on the album and we talked about we didn’t have any. And it was such an amazing, interesting and perfect city to film.

M: We did some Austria stuff, but I’m not sure if necessarily we did some in Feldkirch. I’m not sure. That’s maybe one thing here. Because if you come from the east it takes a long time to get here. So every time we’ve been here it’s usually pretty short amount of time. But when we are on tour around here, we always try to come to this place. Because the people are all really friendly and it’s a great location.

I: What do you think about Meet & Greet?

M: Uhm, I don’t know.. We don’t do that many Meet & Greets so thats fine. But sometimes it a little bit awkward. But you can’t just sleep, eat and play you have to do some other stuff, too.. Maybe drink beer in the sun.

O: It’s like Ted said. It gets a little bit uncomfortable sometimes. Who should start talking, should we present ourselves? I mean, we do meet a lot of fans and we go out in bars and talk to people, I love that. See what they like about our music or if they have a band or just talk about music.

M: Yes, we are a good social group. We’re well behaved social people. I imagine some other bands get super uncomfortable with that stuff, but we are pretty good.

O: When it’s sort of organized, it gets a bit weird.

I: As already said, you are  only playing few shows during a summer. Is it different to summers where you have a a lot of festivals and gigs almost every day?

O: Well, I think when we release an album it’s a big machinery to produce an album, to record an album, then release it and prepare for tour it’s like when you prepare for a big trip or going to a battle, you know. So, when you’re on tour, you’re in this mode and that’s really great. I mean you know the songs more. And if you have a break, you tend to forget. But I like to do this second summers, because you’re a little bit out of your comfort zone. So we try new songs maybe, we try to play songs we’ve never played before, when we do this sort of shows. They are a little bit messier, but in a good way. It’s like been out of the studio and you come back to the studio. It takes a while to remember the sound and get the band together. It takes a little bit more work and focus to do this sort of shows. I like it sometimes. But I really like when we just released an album and it’s a big group, a unit. That’s very strong in that moment. And after a while when we tour a lot, we tour months and then you get a bit tired. So now it’s a little bit more like a vacation.

I: Tonight is the last concert or are you gonna announce further dates?

M: This is the last for a while, yes. I’m gonna work a lot afterwards and I’m gonna record an album with my girlfriend ((A Nighthawk)). And Adam’s gonna go away.

O: Yes, we’ll travel a bit. And I think we gonna start writing songs. I mean I wrote a few already, but I think we gonna start our rehearsing and trying to start working in February. And then, we’ll see. Since the last album we spent so much time in the studio. We always want to be different from the other albums. I think we just gonna spend less time in the studio, maybe rehearse like in the old days and just meet up and write songs in rehearsal space and going maybe to a bigger studio this time in Stockholm and spend there a few days. So we’ll see. I think we gonna see what everybody wants. But we talked about doing a more classic recording, traditional recording this time.
Everybody lives in Stockholm and we hang out a lot. But there’ll probably gonna be a break when I’m gone, we’ll see. For now we have plans to get the band sorted in February. Right?

M: Yeah, yeah I want to! We always had a pretty good open and things falling into place generally. Hasn’t been any problems before. We’ve all been leaving and going to places for a longer period of time, but you know.. It still works. Eric is also back now. Before it was Lars on the drums. It’s generally really good friends we met on the road. He’s a very old friend.

I: Thank you very much for your time. I’m looking forward for your concert and wish you lots of fun up on stage!