I had the opportunity to talk to John Engelbert and Oskar «Ossi» Bonde from Johnossi before their gig at Quellrock Openair in Bad Ragaz (Switzerland) at the 13th June 2015. 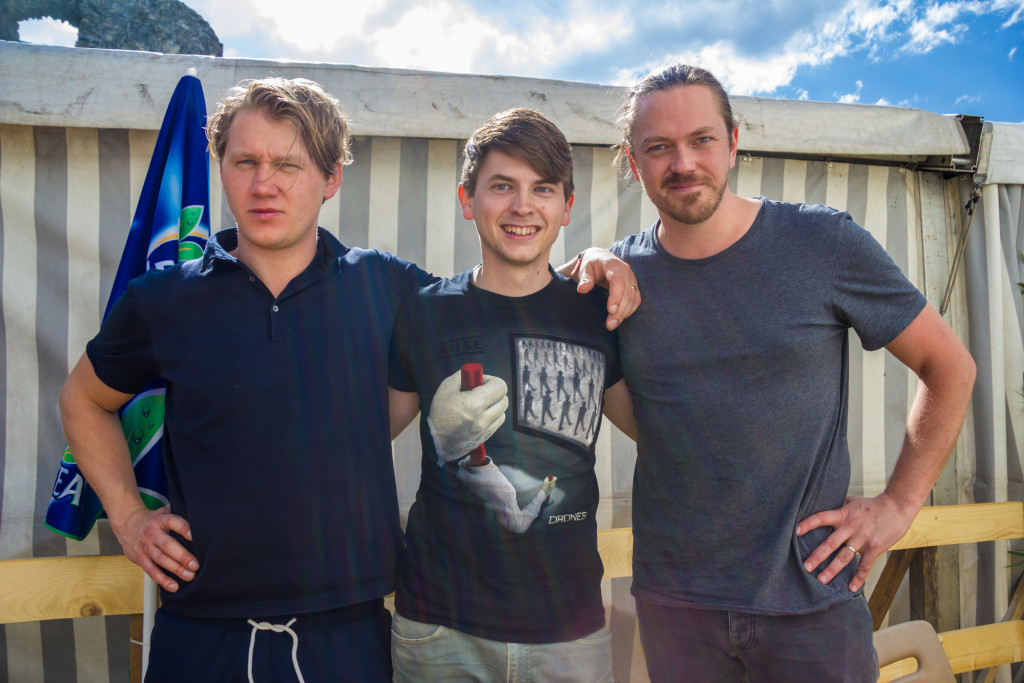 I: Today you’re gonna play close to a ruin. It’s a quite special place and it’s already the 37th edition of this festival Do you still remember the most special venue or concert you’ve ever played in your career so far?

O: I guess, we remember the first big shows. Because that’s always something you will remember, the impact on you. And I also remember the really really early gigs, that we played. It was just me, John and five people in the audience in a shitty small club.

O: Yes. Then we toured so much. And of course we had fantastic shows, but it’s all one big block of memory. It’s often that the shows, that are very particular in some way. When it’s in a very small venue, when there is nobody in the audience or if me and John are sick. Something like that. That’s what you remember. When something extraordinary happens.

I: So, you have been sick on stage?

J: Sure, everything has happened once or twice.

O: You know, we played with high fever. As you say the show must go on. You try to do the shows even though you’re sick. Very seldom we had to cancel a show. I think that we’ve kept a very low statistic about cancelling shows. 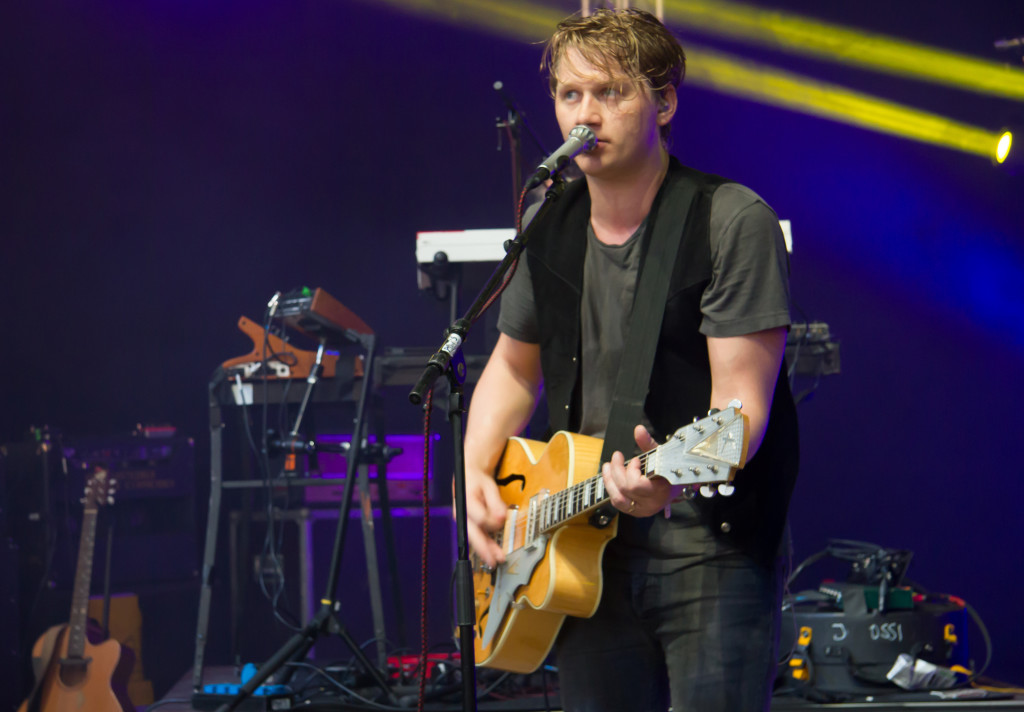 I: Last year I had an interview with Adam Olenius from Shout Out Louds and he told me, that the music scene in Sweden, especially in Stockholm is very connected.

O: He is a very close friend to us. I mean, everybody knows everybody more or less, and then there are some that are even more close, that we even knew before we all were playing in bands.

J: I can imagine, that’s the same thing in Zurich for example. And Stockholm is still a pretty small city. If you’re a touring band..

O: …, you know pretty much everybody. You met everybody. And some of our absolutely closest friends are playing in bands.

J: I would say, most Swedish acts know each other.

I: That means you also get the chance as a young band to support acts or is this a bit more difficult?

O: That’s the chance that we got, even though we didn’t know anybody at that time. We had the chance to play with The Hives. And of course, we brought friends aswell. We always try to help each other and we try to speak good of each other.

J: We always bring friends on tour, when we have support acts. I suppose if you get really huge, like if you play arenas, then it could be perhaps a bit hard to bring friends.

O: Then it’s more like a business thing, I guess and it’s more politics.

J: But for us, we usually bring people, that we think, we’re gonna like to hang out with.

O: And who deserves to get a bigger audience.

I: Once you said, you are one of the most underrated bands in Sweden. How come?

J: Yes, I would say that still. We’re always gonna be the most underrated band in the world.

J: I guess we said that at a cocky moment. But that’s a good thing. You should believe in yourself, you have to believe in what you do. Otherwise it’s gonna be a real hard time for you, to make your way forward.

O: I think we never really see our success in that way, that we feel we made it or something like that. We always feel we’re fighting from beneath. We always try to get better. It’s always the big wolf, that we wanna beat the shit out ouf it.

I: But your festival slots got better, no?

O: The slots got better, but we’re still not happy

J: Everything is getting better all the time. But it’s nice to see ourselves as an underground band and we still do.

O: That motivates us better. If you start to relax too much, then you’re lost. 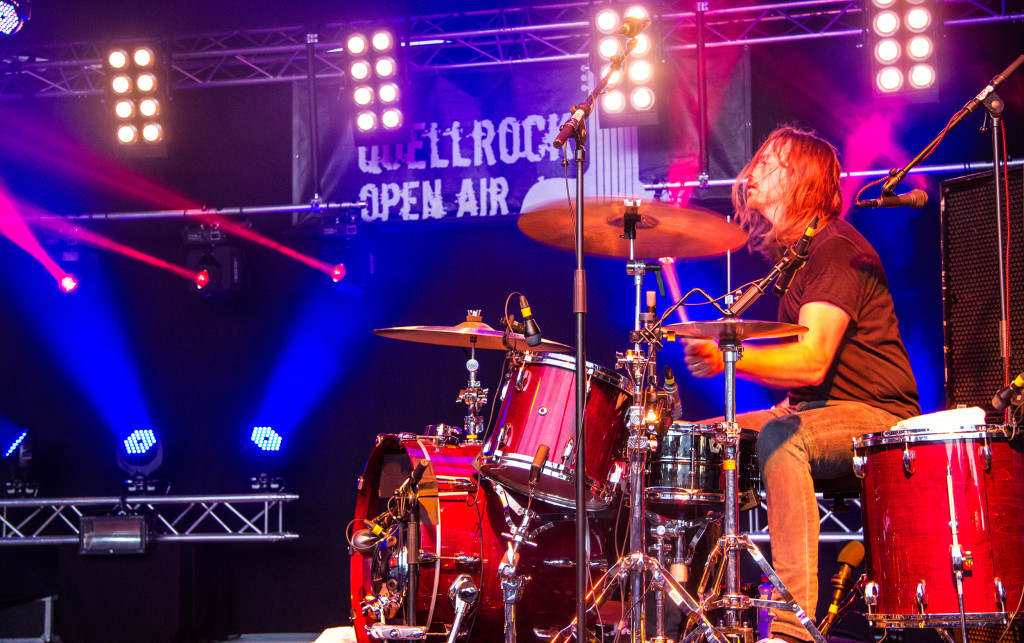 I: By looking at your tour plan, I saw, that you didn’t play that much shows in this and also the last year.

O: We are writing and recording right now. We put really a lot of time into songwriting.

I: Is it only the two of you again or will you get additional musicians for your recording process again?

J: It’s usually us two, when we record. But perhaps we’re gonna use more instruments than guitar and drums. It depends on the song. If the song wants more instruments we’ll do that. You add stuff and take it away. It’s a process and finally you know, when you’re done. It’s nice to decide before a bit, before you go into the studio, to put up a few guidelines, otherwise the painting tablet is gonna be to big.

O: And that’s what we’re talking about right now. How the production will be and who will produce it. I feel, that we have most of the songs right now, and they’re really good songs. We just try to figure out who’s gonna be the one who holds the oversight of the whole thing. Because we don’t wanna be the producers in that matter. We will of course be involved in the production, but we want to find somebody, who could really add something to our vision

J: The last record, we’ve been producing quite much by ourselves, together with another guy. But it’s been a split role. We’re always gonna produce our own music. But this time, we want more a producer.

I: Talking about your last record „Transitions“, which was released in 2013. It was a real step forward with the keyboard and the arrangements, I think. Could you think about stepping back?

O: I think, that there will be some stepping back and maybe some stepping forward. If we do new stuff, we always tend to like some of it and with other things we think, we don’t need that. I think it will be more a mixed album.

J: But I don’t think we’re gonna step back. We’re gonna step forward(says something in Swedish to Ossi and laughs). If we wanted to sound, like we did a couple years ago, than it’s not interesting just to go back there. Because we’ve already been there. We have to take that feeling whatever it is, bring it foward and do it in new modern way. Sometimes to sound retro is really hard. If you try to do it just as a thing, it usually fails. The key is to sound modern in a retro way, you know. By just doing it another way. It’s a process, that we’re in right now.

I: You two never had problems with each other, otherwise it wouldn’t still work as a duo. Not long ago, I read that Gustaf Norén is leaving Mando Diao. Since you know them and played with them before, what do you think about this? The band will try to exist without Gustaf. Will this work in your opinion?

J: Of course, it’s not gonna be the same, because Gustaf is not singing.

O: He’s not there. But I’m sure that Björn and the other guys will have some fantastic concerts and they will write fantastic music together.

J: It’s not gonna be Mando.

O: So, it won’t be the same. But still I think, if they want to continue, they should definetely continue.

I: This is the last concert for a while. Will you maybe announce some more for this year or is this it?

O: For this year, I don’t think so. We have maybe five festivals this summer and that’s it.

J: And we’re gonna start recording after the summer.

O: Or in, during the summer.

J: The whole recording process. Finishing the record, doing everything, preparing for a release, is gonna be the whole year.

O: It’s still a lot of work to do, even when we finished recording. So, I think, this small festival summer, will be the last live shows we do this year. And we’re really happy to be here. It’s a fantastic site. 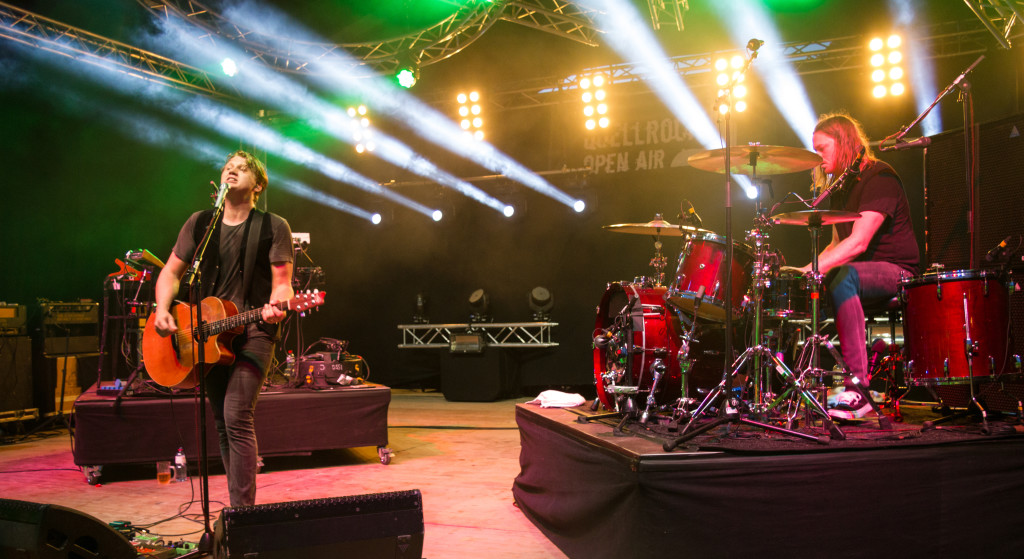 I: You visited Switzerland several times over the years. When I look back on it, I remember way more festivals than club shows from Johnossi? Is there a special reason for that?

J: We played a couple times in Zurich and also in Berne, that’s about it.

O: We tend to say yes, when it comes to this sort of festival shows. It’s nice to come here in the summer. The atmosphere and the audience is great. And I like these small venues.

I: Did you get to know any Swiss artists over the years?

I: It’s quite hard for Swiss bands to get heard internationally, even if there are a lot of great bands in our country. What do you think is the main difference to the Swedish music scene?

O: Depression. (laughs). It’s a pretty dark country – Sweden. Not dark in the way, of a disfunctional way. It’s more a dark country in lack of sun. And people really really tend to dig into themselves. And they really do some soul searching. But there’s a lot of reasons. We’re up on this island basically and I think we tend to really look around all over the world, for new kind of music. And we’re really influenced from the rest of the world, because we’re far away from everybody else.

J: And that’s a thing about the Swedes in general and not yourself, right?

O: Yes, Swedish music. And I think, that it all boils up to something unique, something really good. And I think that’s part of why it’s so successful. 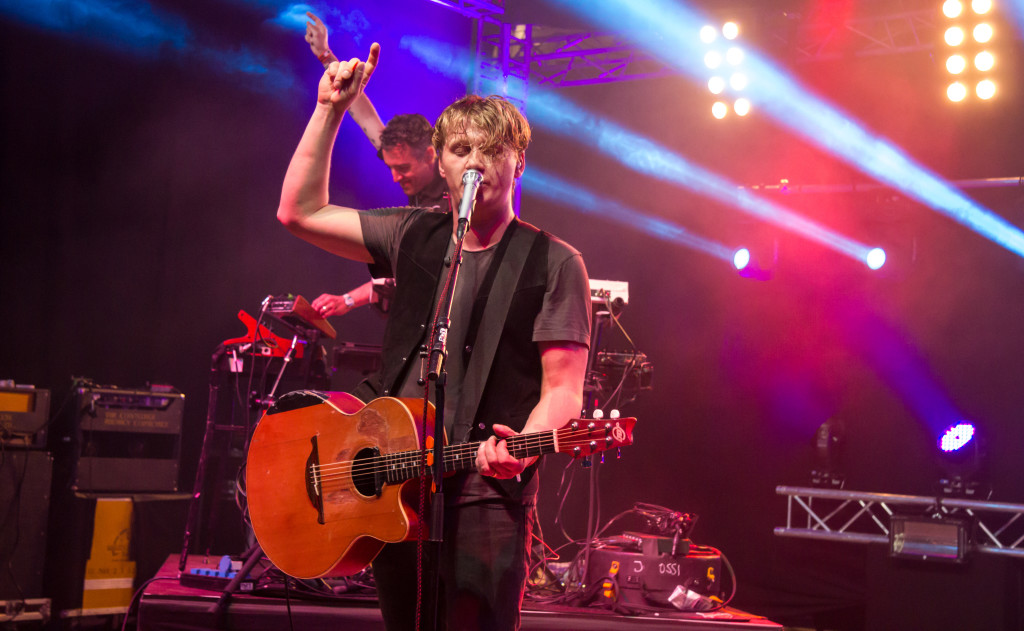 I: Do you see it as a chance, that there are so many bands around you in Sweden or is it harder to get heard as a band in this country?

J: I think, it helps. Because a scene always brings lots of artists.

O: And you know, that you have to keep a really high standard as a band. Every Swedish band is working really hard. Especially with the songwriting. The songwriting process in Sweden is generally very unique.

I: Will you stay at the festival site in Bad Ragaz after your show?

O: We’ll fly home very early tomorrow morning. So, after the show, I guess that we just go to the hotel and try to get some hours of sleep and then back to home.