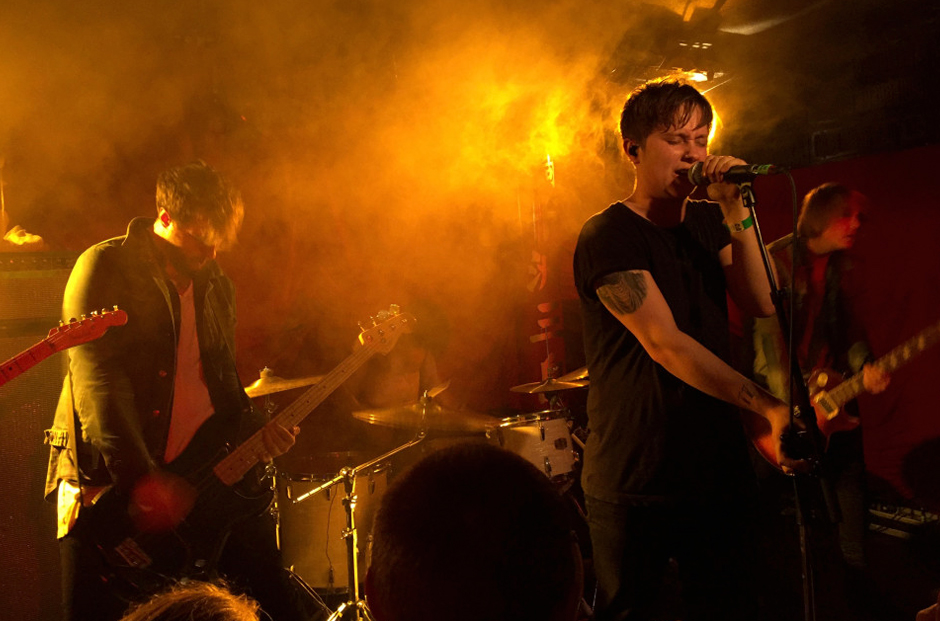 Right before their concert in Zurich, I had the opportunity to talk to the guys from Nothing But Thieves. Thanks for the nice chat. 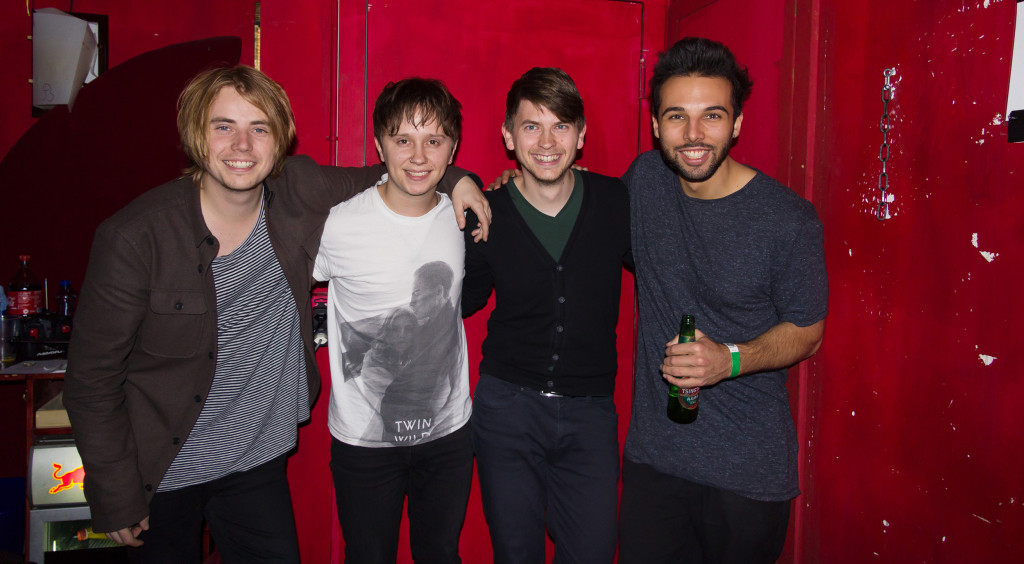 Indiespect: Welcome to Zurich. When did you arrive?

Joe: Today. This morning. We were in Como yesterday and in the Netherlands this week and then tomorrow we are in Cologne.

I: I heard that you already recorded a few songs for a second album. Do you already have plans to release it in the nearer future?

Dom: That’s really vague at the moment. The plan is to tour with this album for the next year and do the festivals and then hopefully record album two by the end of 2016.

I: But you have the songs ready?

Conor: A few. We just started a bunch of ideas, like 10 to 15 audios. And I’m sure over across the year we will get another 40 or 50. It’s just a start but it’s a good start. And we are really happy with the progress.

I: It seems like you already have plans for festivals next year.

D: Well, hopefully. The offers for festivals start coming in. We actually had a lot from European festivals. We can’t name which ones yet. But there might be some really close to here.

D: We can’t say anything… 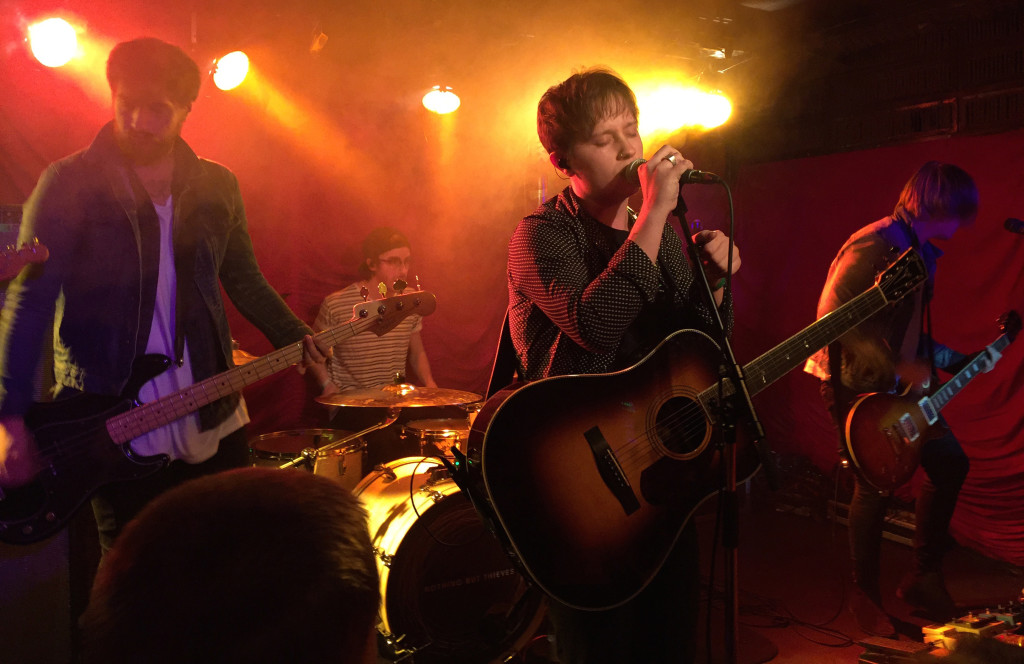 I: Tonight is your first proper gig in Switzerland. Is that right?

D: Pretty much. We sold out a headline show, that’s pretty cool.

I: You played in Basel in March this year, I heard. For the Energy Live Sessions.

D: Yes, Energy. That was our first taste of a Swiss crowd. It was really good fun so we’re looking forward to tonight.

I: What do you expect from the Swiss audience?

D: I don’t know. The rest of the European dates have been really good. So if they’re like any other European crowd, it should be good. I don’t know how they gonna fit 170 people in that tiny room.

I: Talking about this tiny venue. Did you hear that they are closing down the Kinski by the end of this year?

C: No! That’s happening a lot in the UK actually.

D: Yeah. A lot venues are going… It’s nice that we’re going to play here, but it sucks that it’s going to close down. That’s rubbish.

I: You had a really big show, supporting Muse at Rock in Roma this year. How did you get that slot?

C: The tour manager of Muse has heard of our band and showed our music to Muse. And then they just asked us. It has been a bit of luck really on that behalf. We turned up in Rome and didn’t really quite know what to expect. It was insane – 30’000 people.

I: I can imagine you had to be really, really nervous?

D: I think the number sounds more daunting, than it is. Because we just do the same thing, when we go out and play. I think when someone says that there are more than 30’000 people waiting for you, it just sounds scary. But we’ve been doing that for years. It’s kind of our job so we got used to it.

I: Did you have a chance to meet Muse afterwards?

D: We didn’t actually. They were really quick to get in and out. They also had lots of family with them. We left straight away aswell, because we had to go to Belgium for a festival. Sometimes you don’t even get a chance to stop and think, because everything happens so quick. 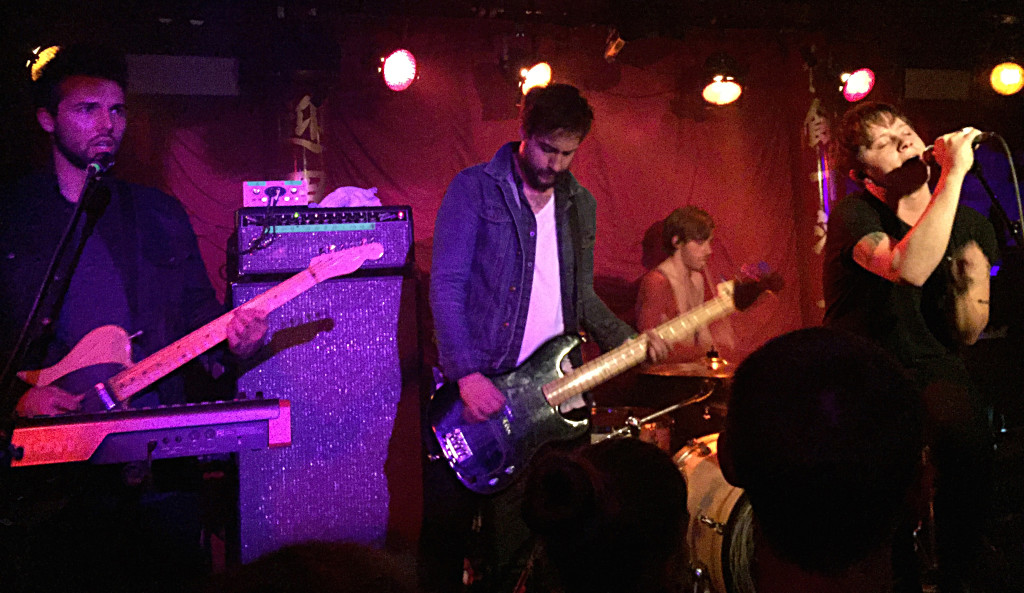 I: In an interview I’ve heard that sometimes it’s difficult for you when you are playing at a festival, because you used to go there as visitors the years before and could drink and have a party. Now you are on duty. Do you still find time for party at all?

J: Yes, we still can. We’re at a stage in the moment, where we’re not massively well known. A bit maybe. So we can still jump over and be in the crowd for the next band.

I: But there were already girls waiting outside at the front door. So you seem to have groupies by now.

J: At our own shows it’s obviously a bit different. But when we are at a festival it’s less.

C: And this was in the summer. It started to pick up a lot since then. Early summer was fine. We could just walk around.

D: Before our most recent headline show in London at the Electric Ballroom there were fans queueing outside the venue like way before. And that’s when you have to go to the back of the venue to avoid them. Not avoid them, that may sound wrong. But when you have stuff to do it might be a bit overwhelming. It’s new to us, but we try to meet everyone we can. After the gigs we go and say hello to everyone. It’s just nice because they are all fans of our music and it would be weird to shut them off.

I: Conor, you had problems with your voice recently. Is it all good again?

C: Yes. I was just ill for a week and it took me a while to recover. But now it’s fine. So, there am I now. I got a bit a tickly cough today but I’ll drink some stuff and be fine.

I: I wonder if you have a story that you’ve never had the chance to tell? A band story, a strange story?

D: There will be something, just give us a moment. Phil, can you think of any strange stories we’ve had before?

Phil: Uhm… once I saw a ghost and then I thought ghosts don’t exist and then there was no ghost anymore.

D: We have a lot of stories but they can’t be shared. Sometimes we can’t even share it with each other. I don’t think we have any sex tapes of each other yet.

I: When you arrive in cities, do you still find the time to discover them during the day?

D: Not usually. Yesterday we had a day off in Como. That was amazing. Because obviously when we have a show we have to do soundcheck. There are long drives. You get to the venue, soundcheck, you have interviews to do and other press. You do the show then you have to drive to the hotel.

J: We get more the nightlife aspect. We never get really to see the city but after the show at night we can go out.

D: We’re happy with that. But it is really nice to have a day off and we do get to explore.

J: We always tend to discover the underbelly, like the dark underside of a city rather then the nice and pretty things.

D: Yeah, we go down the dodgy alleyways at 4am.

I: Does your tour manager has to stop you sometimes?

D: No, he is the bad influence. He went out last night. We stayed in. He was out till 2am. But if we know we’ve got something really important the next day we won’t get fucked.

J: We’ve learned to play really well with a hangover. The adrenaline of playing is the best hangover cure.

D: Our alcohol tolerance is so high right now. Literally, I can have a few beers and it would be fine. Or our hangover is so common that you get used to it. A bit worrying really. Don’t let my mum know this. Actually, she wouldn’t care. 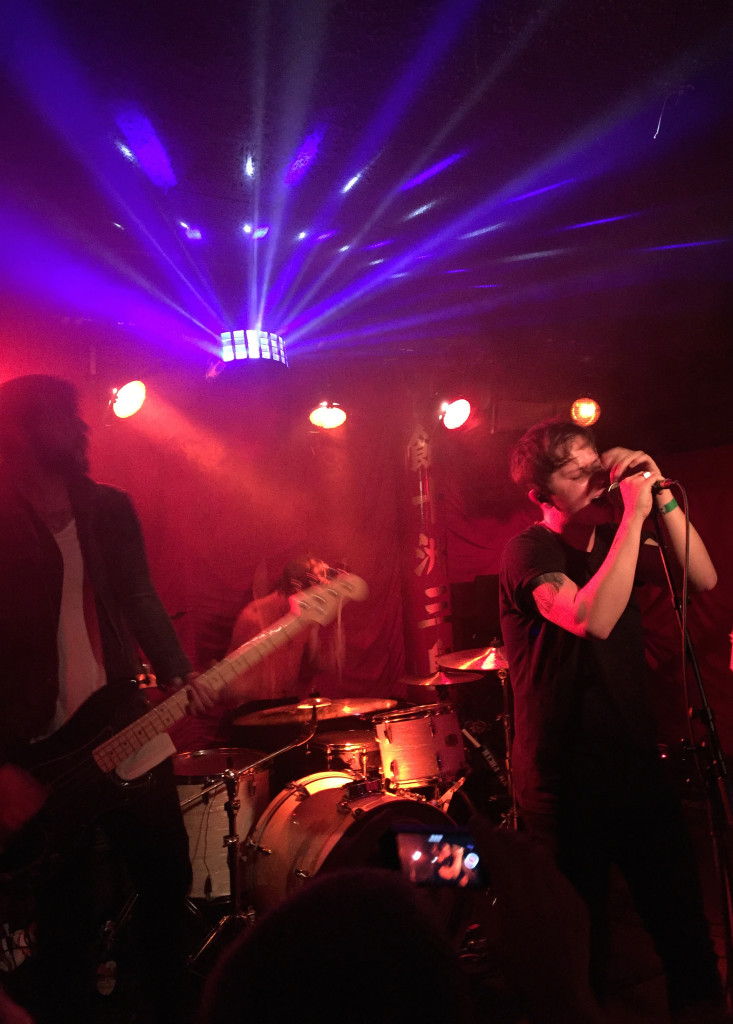 I: Who is writing all your lyrics? That’s not you Connor, is it?

I: It’s quite unusual that the singer does not write the lyrics.

J: Fairly unusual, yeah. But there are bands who do it. Led Zeppelin did it for example. I think it just happened.

I: But you never thought about singing?

J: Have you heard him sing? So why would I try?

C: We were all very young when we started. We just did it this way.

J: I have to remember that day. Dom complimented me.

D: I think it was the Thai beer, mate. It makes me crazy and makes me being nice to people.

I: Then you should drink a lot of beer.