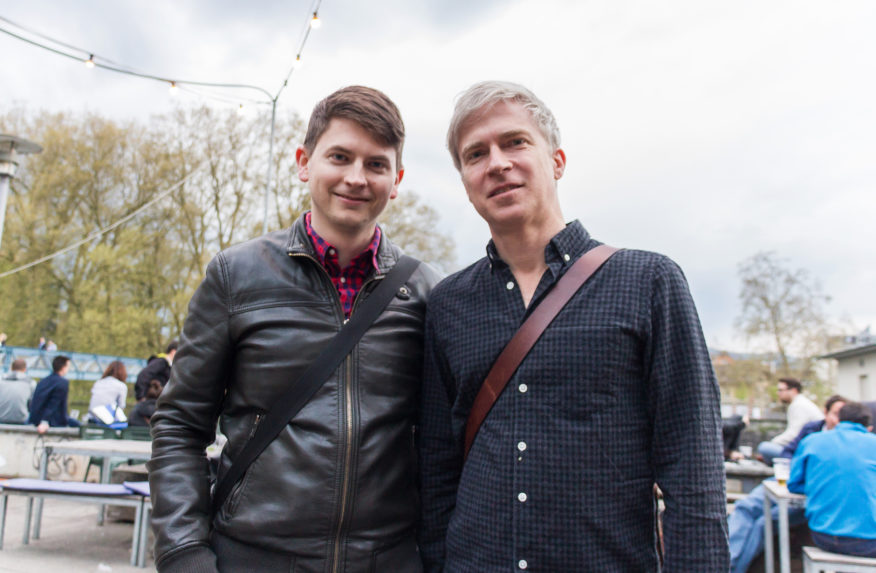 Normally you do an interview in the backstage or in another small room. With Matthew Caws singer and songwriter from Nada Surf it was all different. He hadn’t had anything to eat before our meeting and so we went out for dinner close to the central station in Zurich.

Indiespect: Are there a lot of times, where you don’t see your bandmates? When you aren’t planning a record or a tour?

Caws: Yes, there are. Because we don’t live in the same place. So no, we don’t see each other, when we’re not working, I mean very rarely. We used to live near each other and I miss that. Mostly because of the way we used to work. We could go to the same practice space two or three times a week. It was very low pressure and we could fool around. And now it’s a really different system. We wait until I have enough songs where it’s safe target. We have to buy airplane tickets so it has to be serious.

I: Don’t you send the material to them beforehand?

C: We don’t do that very much. I don’t really haven’t finished it by that time. Sometimes I’m finishing songs on the plane.

I: So you are the only writer within the band?

C: Yes. It would be fun to not be the only guy. Daniel used to write songs. On the last record there was a bass hook, which is amazing.. We tried to turn that into a song. And then Ira has written some things. In our song called «I Like What You Say» there is a part that goes: «Baby, I only wanna make you happy.». That’s his part, which is awesome. It’s really catchy. 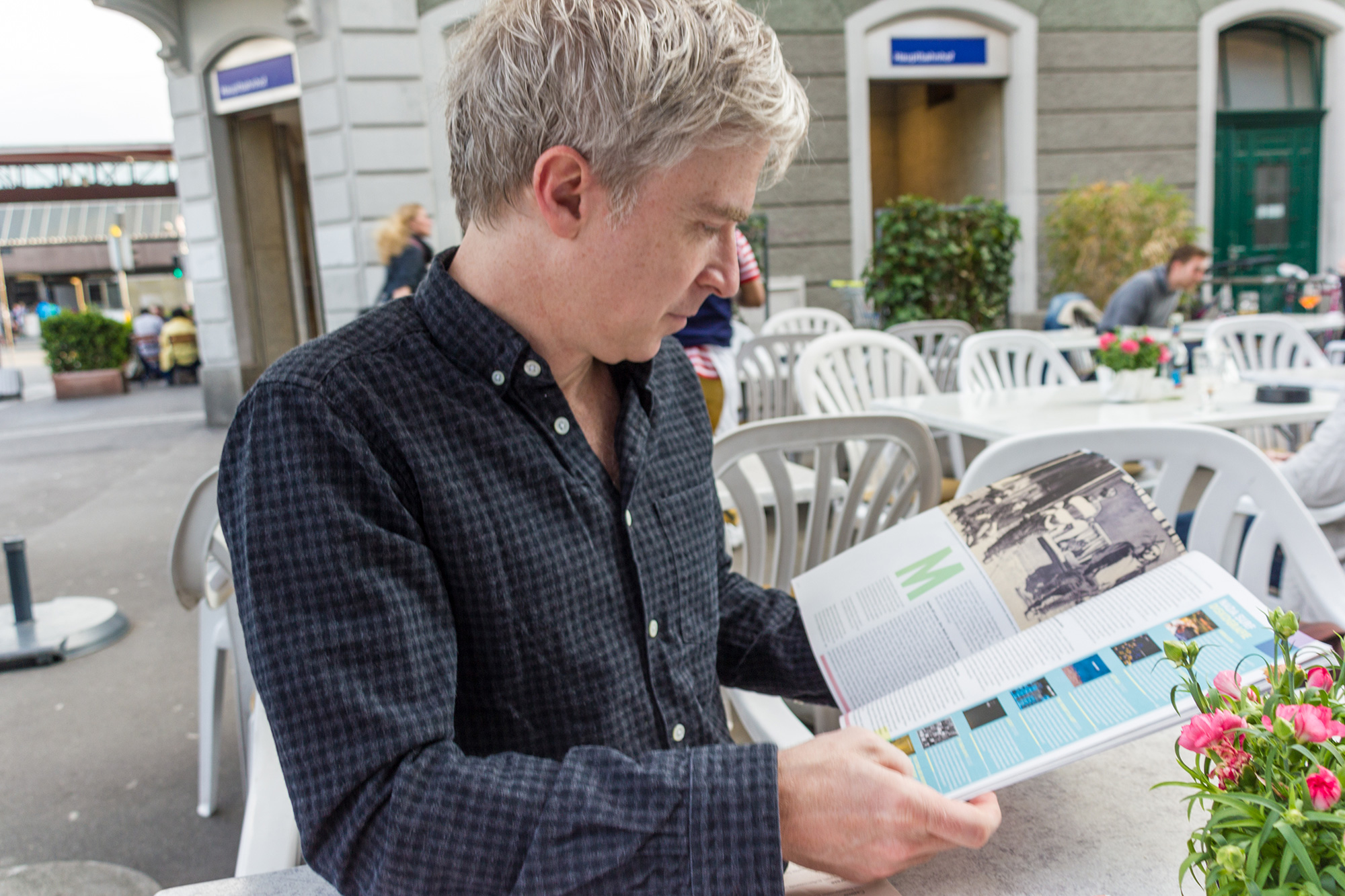 I: On the 2nd December you’re playing one of the first shows, after «Le Bataclan» in Paris reopens in November. That happens almost exactly one year after the horrible terror attack. How does that feel to you?

C: It feels useful. It feels like contributing to the feeling that life can continue the way it was. We’ve played there three times already and it’s our favourite club in Paris. After that happened, the very next day we were all asking our manager: «when can we play there again?» We’re not nervous about playing there, the same way we weren’t nervous about being in New York after 9/11. I don’t want in any way say anything about such horrible events that changes their size. But the fact is, you grow up knowing the World War II happened… and Vietnam. Insane shit. And of course there are a million other terrible things in the world. I’m just speaking as somebody who is living in New York. You learn about the tragedies that are connected to your country. And that’s why the events in Paris marked people so much in my community. Because that was music world. That’s where we go.

I: I didn’t mean if you are afraid in the first place. I can imagine that when you play a show at this place and you know what happened there, in you mind you see horrible images of that nightmare. This is what I thought is maybe a problem for bands to play there again.

C: I know exactly what you mean and I’m asking myself right now why I haven’t thought about that. Maybe that’s small minded. It’s just like violence is everywhere. The whole world is terrifying, it’s scary to be alife. But that’s the kind of thing I don’t wanna say. I’m so privileged in my life. I live in the west. I live in countries like France, I live in England now, I’m from New York. There are three countries which feel like home for me. Asides from that events in Paris and from 9/11 and asides from America’s being in war in Vietnam when I was growing up and then the Golf and Afghanistan… I have a privileged life that has been really safe. And it seems like «Le Bataclan» will surely be one of the safest places on earth right now. We played a show in Belgium, in Brussels a month after the attacks there, and there were two machine gun guards.

I: I understand that there has to be more security but somehow it’s crazy. Also the opinion of Jesse Hughes from Eagles of Death Metal, who said, that everyone should be armed during a concert, to protect people if there is a terrorist attack it’s really stupid.

C: I of course do not agree with him at all. I think it’s terrible.

I: What was your next concert after the attacks in Paris?

C: We played in Washington D.C. that night. We learned about it right before going on stage. Something interesting happened. I said something about Paris on Facebook. On our fan’s page. We’re not a big band but on the page are around 170’000 people, that might read it. And I said something about sympathy and things you try to say when something like this happens. And somebody wrote to me and said «you didn’t say anything about Syria.» It was interesting. So going on stage in Washington that night, it didn’t feel that strange or intense for me for some reason. This act of violence happend at a concert but it doesn’t change the feeling of an average concert. The way you get on a plane doesn’t change by the effect, that a plane crashed. At least it’s how I feel 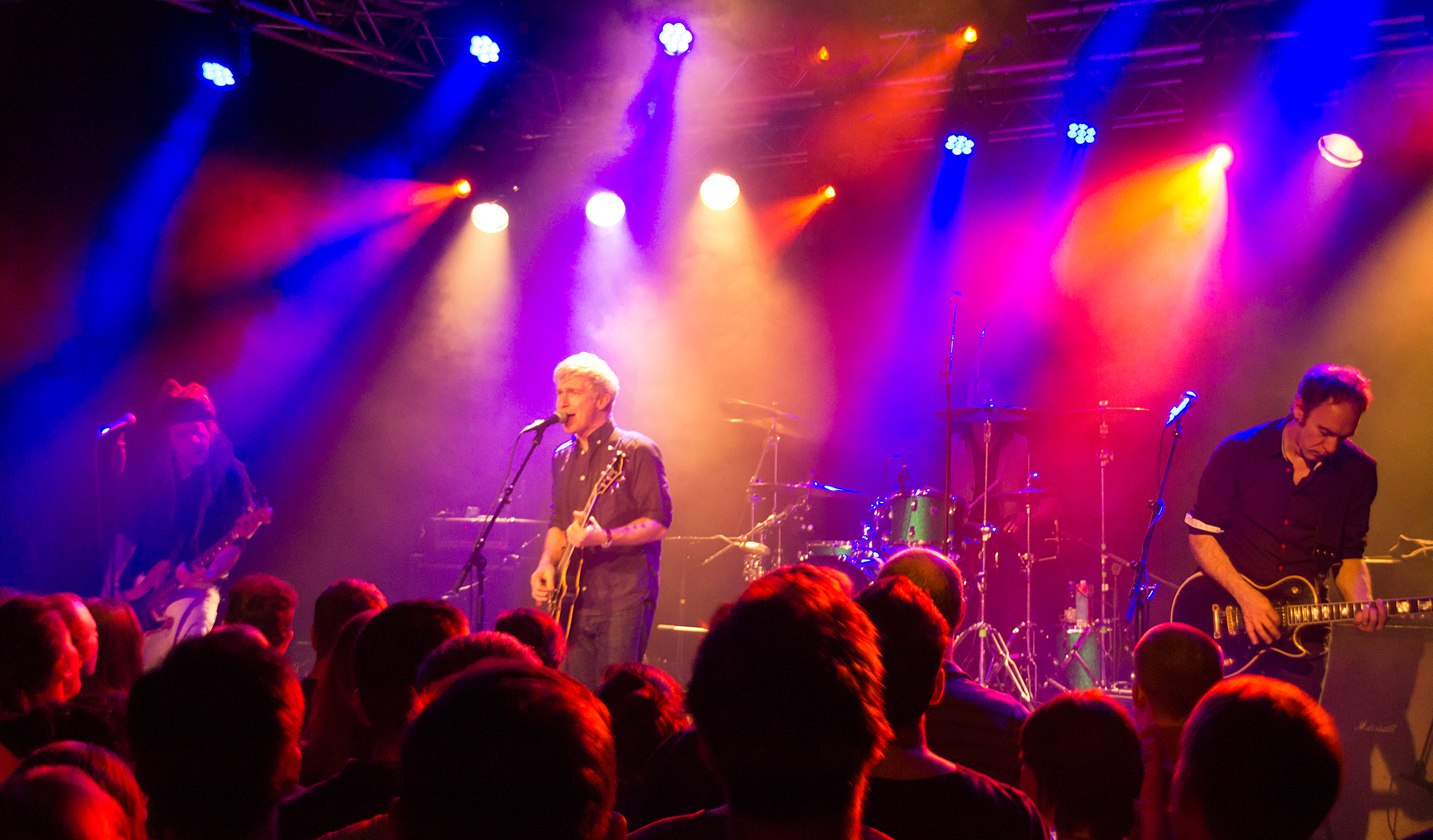 I: Talking about your support act. Do you choose them for the whole tour or only for specific shows?

C: Farewell Dear Ghosts are with us for Germany, Austria, Switzerland and Italy. I like them, they’re great.

I: I sometimes have the feeling that support acts for smaller shows are most of the time better than when they are able to open for band in a big arena. How is your experience with that?

C: They take their power away at big shows. I also don’t like that. We’ve a few times had the case where a band opening for us was kind of better or just a more powerful band. I didn’t really mind. We had The Secret Machines opening for us. A New York band that plays kind of Krautrock. They were just incredibly powerful. Really hypnotic rock. They were just doing three songs, ten minutes each. And then we played and the audience was kind of like: «we gonna go home.» They kind of in a good way killed the audience.

I: Do you have any weird backstage stories?

C: Let me think about it. It’s the same as anybody’s party stories. Aside from it turning to a party sometimes Backstage is not that interesting. It’s just where you’re getting ready, sitting on your computer or warming up your voice.

I: And most of the time it isn’t that beautiful, aswell.

C: It depends. Most of the time not. There is a club in Philadelphia where we were playing in the basement of a church and the backstage was the church itself. So you’re up there having a beer and there’s plenty places to sit of course. If even slept on a pew once. A friend of mine did a record in a church and I went to visit him. I was sleeping on the pew while they were recording in the middle of the night. But the craziest things that happened to the band were mostly the shows itself. It’s such a weird expericence, a great one. To be in the front of a lot of people who are singing your song to you is kind of nuts. I don’t mean it like how awesome it makes me feel. If it inspires people it makes me feel really warm. It makes me feel useful to make somebody feel good.

I: You are also known as a friendly person. There may be huge bands with a fanbase that screams and sings along to their songs but they have a really big distance and no close connection to the audience. Maybe for them it feels different.

C: Yeah. Touring is hard for a lot of people. It’s also hard for me to be away from my son. I’m a single dad, but I’m engaged now. So it’s hard to be away from my fiancee aswell. But aside from that I really love the experience. If I didn’t feel the connection to the audience or could talk to people after the shows, touring would be a lot lonelier.
It would be nice to be huge and to be successful in a material way. Not that I care much about material things, but it’s nice to own a house and don’t have to think about money.
I’m nowhere around that level. It could happen, but I don’t know what it would take. 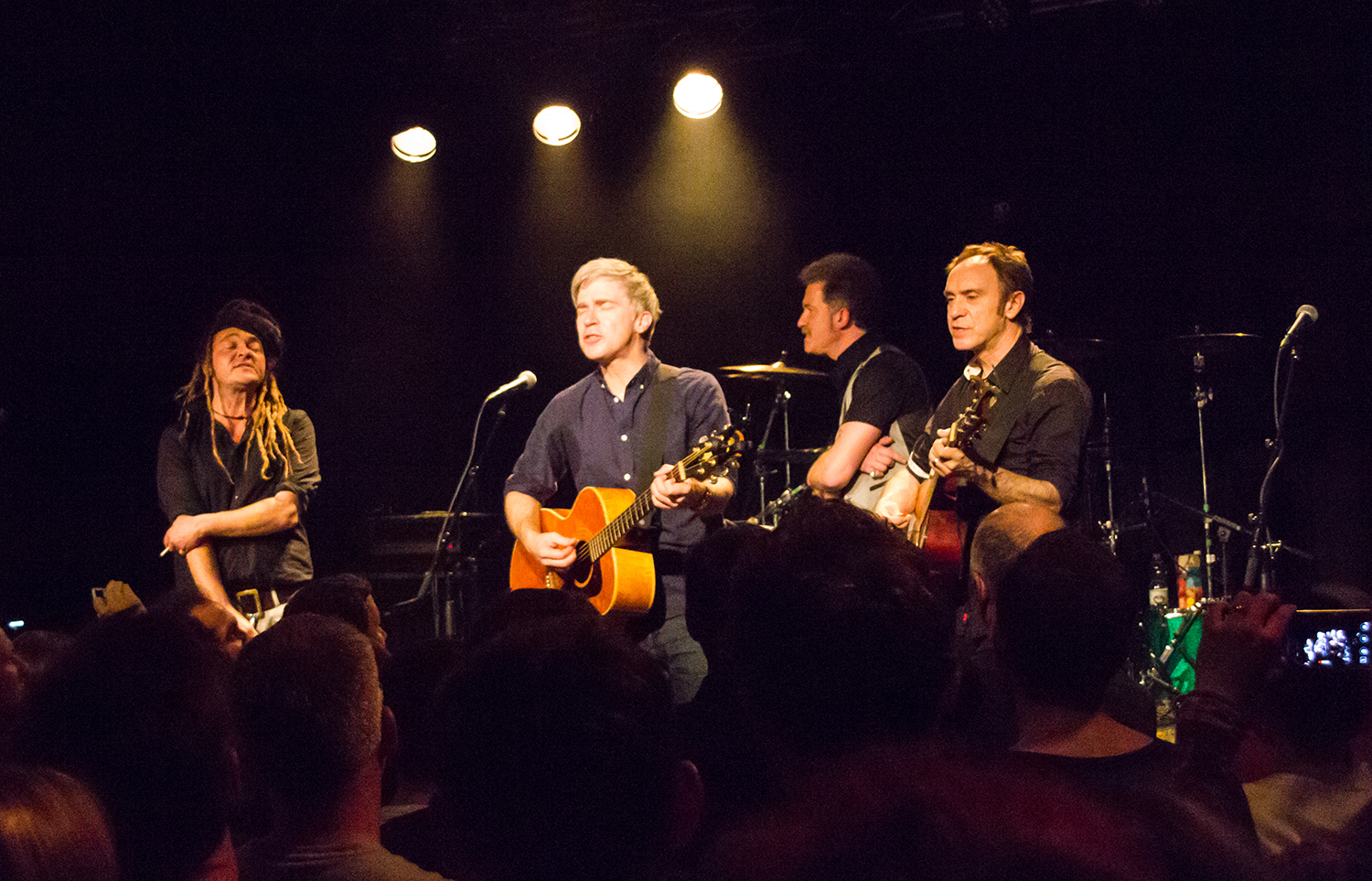 I: You play music fur such a long time and I think you could handle it. When bands are younger and get an instant success, they sometimes don’t know how to deal with it.

C: Oh no, my character would never change. I’m settled. I’m who I am and that’s fine. When you’re younger even your accent can change. If you’re American and you move to Britain in the age of 15, maybe you’ll sound British. I’m American and moved to Britain when I was 44. I’m 48 now and it’s not going anywhere. I’m not shifting. My dad is British. And his accent shifted a little. It didn’t get American but he doesn’t sound that British anymore. He was 21 when he moved.

C: Interesting story. My dad was born in a fundamentalist Christian sect, that a few years after he left became a cult. He was born in 1931. When he was growing up London was bombed in 1940. He was nine years old during the Blitz. They didn’t go into shelters. When there was a bombing all of London would go under ground but his family would stay above ground because they thought, if it’s god’s will… That’s terrifyng. He also couldn’t really listen to the radio, wasn’t allowed to read the paper. A kind of religion where the modern world is bad. This religion was young enough, that people running it were nuts.

C: He got a scholarship for going to graduate school in Yale, to go for free. And they let him go. The day he left he also said: «I’m leaving the faith». They were very upset but when he would come back to visit, they’d still talk to him. He left in 1955. But in 1962 something changed and that’s when they went from a sect to a cult. The person in charge said: «you can no longer talk to people on the outside». So after 1962 he never saw his parents again and I never met my grandparents because I wasn’t allowed to. I’m the son of their fallen son. We have a song on the new record that’s about that. It’s called «New Bird». This relegion was called «The Plymouth Brethren». That means the brothers. That’s what they were called when he was born. And then in 1962 the branch his family was in became «The Exclusive Brethren». So they were the exclusive, they exclude. Why am I talking about that? Oh… That’s why he moved. He moved to get away. Very brave and very sad. Sad because he lost his roots and his family. It’s crazy.

He kept flying back from school
Still trying to be a decent son
But when he knocked on their front door, they wouldn’t comeNew Bird by Nada Surf

The dinner with Matthew lasted a bit longer, than the interview was supposed to be and so I ended up missing the opening act completely. But it was definitely worth it.