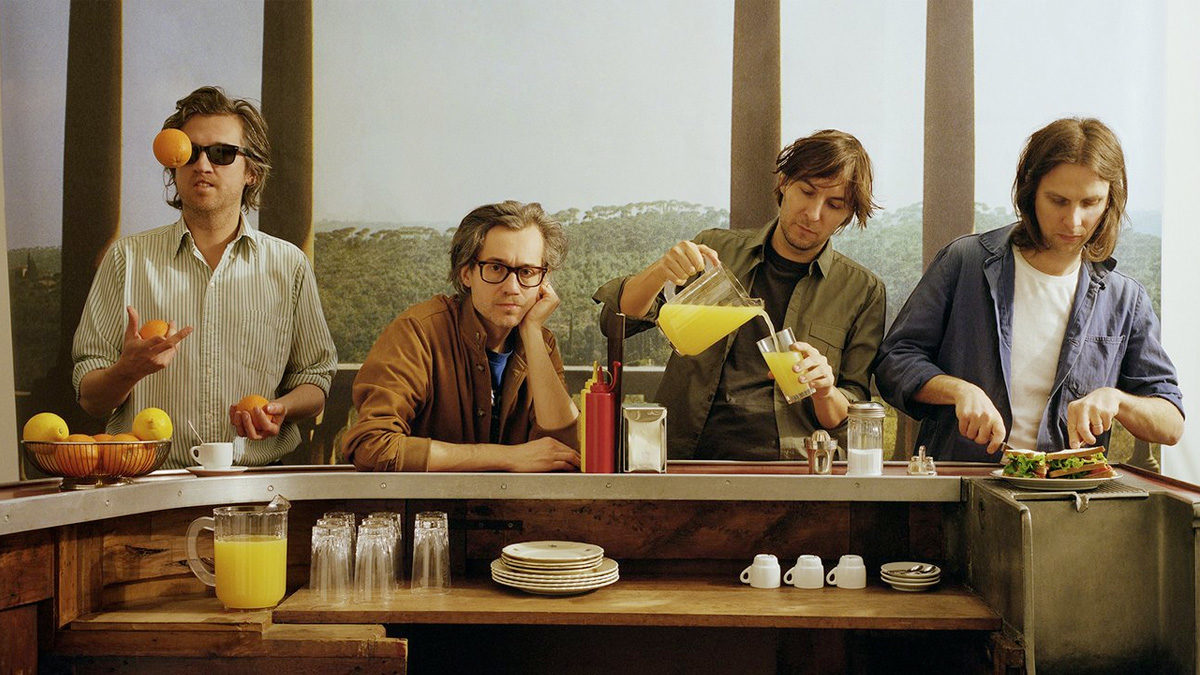 Since their grammy winning record Wolfgang Amadeus Phoenix in 2009 the French band Phoenix is known all over the world. Almost everyone has heard their songs like Lisztomania or 1901. Phoenix were founded in 1996 in Versailles. During the 21 years of existence the musicians have released seven records. The last one called Ti Amo was published in late 2017.

In the German-speaking part of Switzerland the French have been rare guests. They played the last gig at the X-tra in Zurich in late 2006. Almost 12 years later the indie-pop heroes will finally return. On the 21 March 2018 they’ll enter the stage of the Volkshaus. The show will take place in a comparatively small venue. The likable musicians are normally used to play on big festival stages. During our phone interview Thomas Mars revealed some interesting stories about his life. Additionally he told what the audience in Zurich may expect and what’s the story behind his iconic red microphone cable. 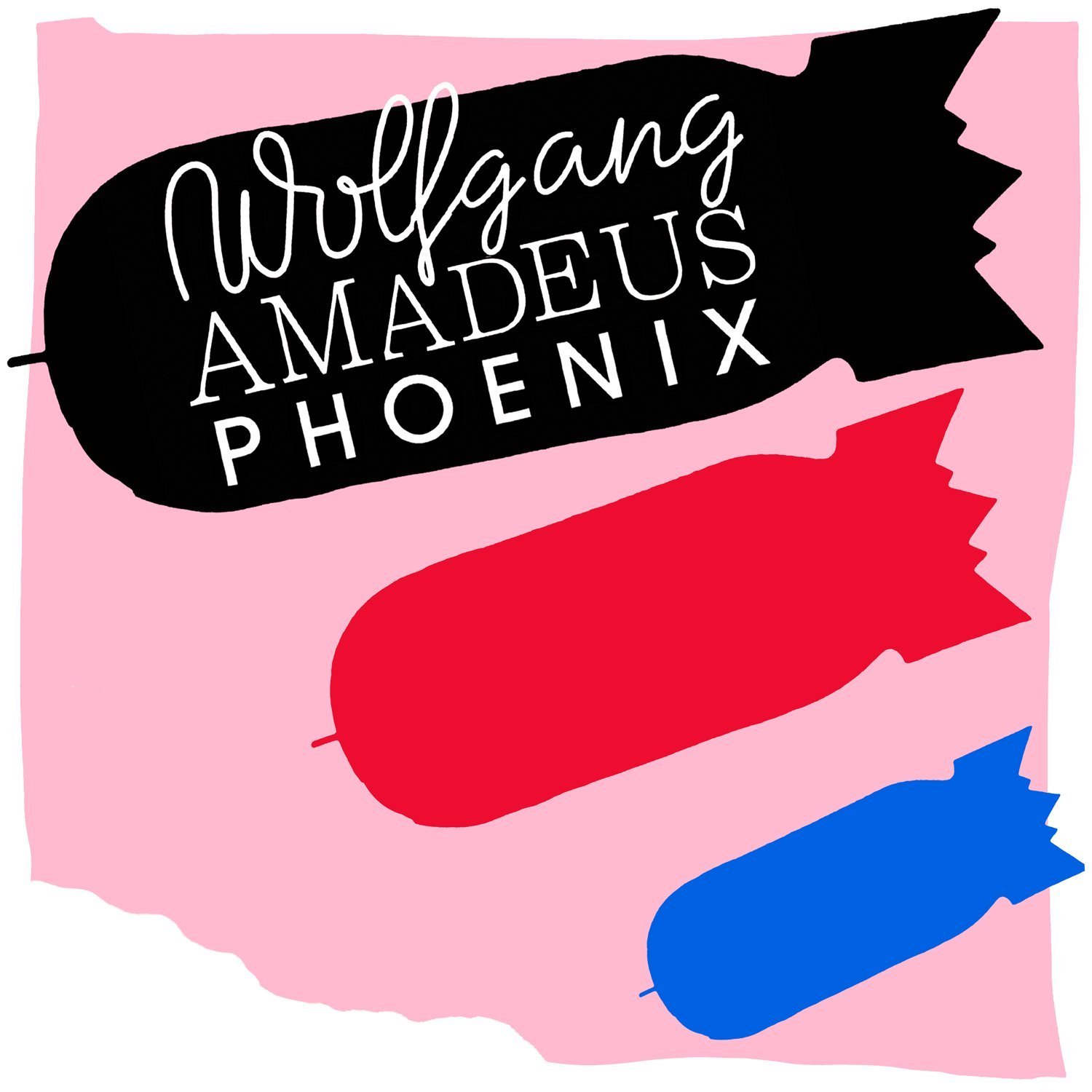 With Wolfgang Amadeus Phoenix the band won a grammy in 2009 in the category «Best Alternative Music Album».

Retro romance in the music video of the title track «Ti Amo».

Phoenix are Thomas Mars (vocals), Christian Mazzalai (guitar), Laurent Brancowitz (guitar) and Deck D’Arcy (bass). Although he doesn’t count to the main formation Thomas Heldung (drums) and Robin Coudert (keys) still belong to the Phoenix family. Mars lives in New York with his wife, the director Sofia Coppola. The rest of the band remained mostly in Paris. Only ‚Branco‘, how Laurent Brancowitz gets called lives most of the time in Italy. How does a band manage to work together in spite of those big distances?

I’m in New York City but I go to Paris every month. So, we still work in Paris. And I return when we recorded enough material to keep on working even if we live far from each other. Once we have everything we would see each other again. We have to see each other because working far from each other is a really frustrating process. Not only for the music but also for your relationship. To be on your own in front of the computer is the life of more and more people. They work from their home but I think that’s a sad thing. It has not the same vibe. It’s just lonely and sad.

Also the new current record Ti Amo was developed in Paris. It took place in a time where terror attacks rattled the French capitol. The band witnessed those events very close since they were located in the studio during that moment. Still or maybe just because of that they recorded a very cheerful album. Did Phoenix try to push away the things around them?

No, we didn’t try to escape or push it away. It’s more the natural reaction to the darkness and just to find some sort of light for the four of us in the studio. It’s more of an antidote to that. 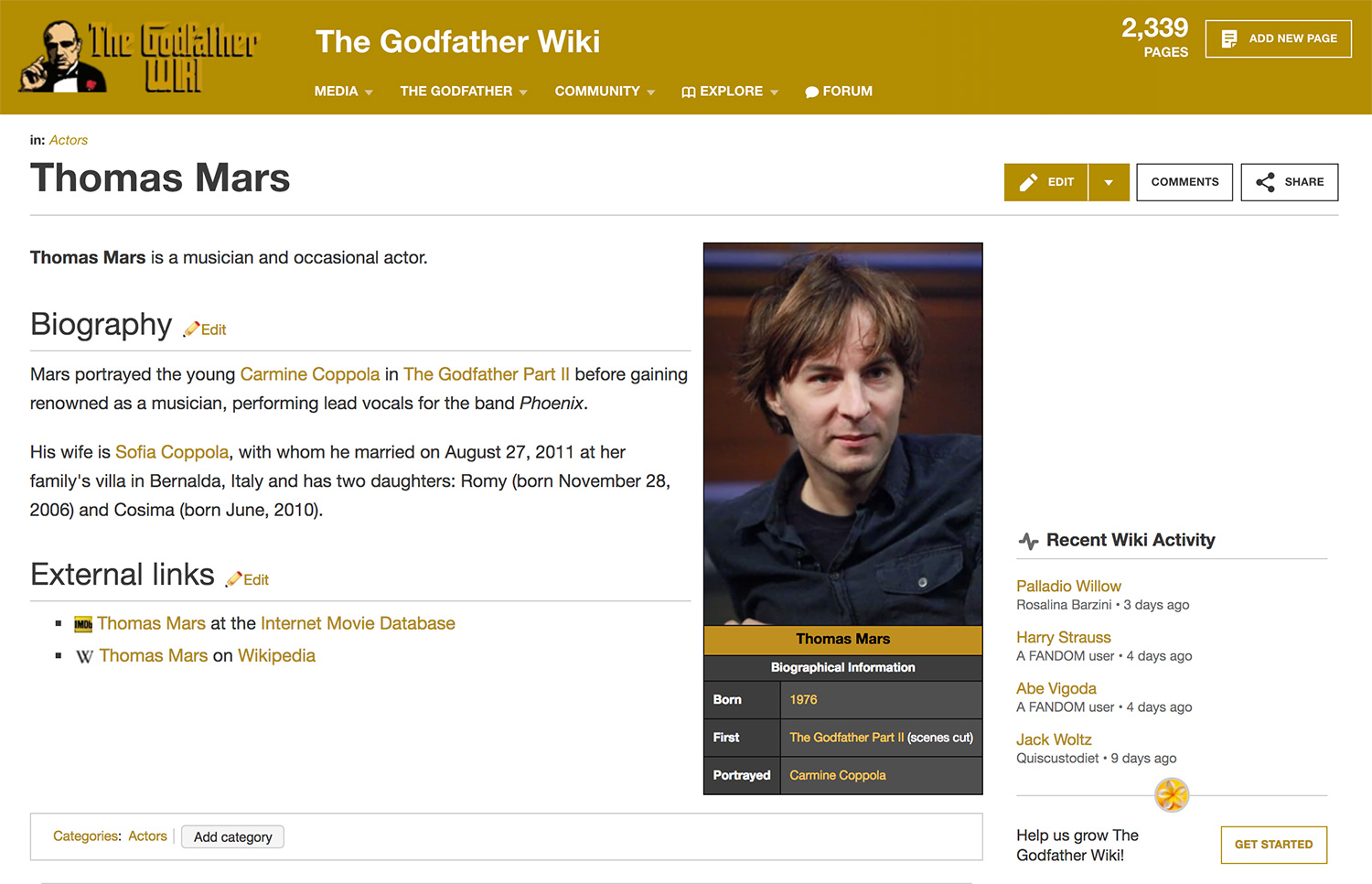 Besides the music also the family background of Thomas Mars are quite interesting. As mentioned in the beginning the singer married director Sofia Coppola (Oscar winner, Lost in Translation) in 2011. She herself is the daughter of Francis Ford Coppola who directed the cult franchise The Godfather. And her cousin is well-known as well – it’s Hollywood actor Nicolas Cage. In the internet there are even rumours that Thomas Mars himself portrayed a boy named Carmine Coppola in The Godfather II. When mentioned the singer has to pause for a second.

I wasn’t alive yet when they shot the movie. Carmine Coppola was the father of Francis and he did the score for «The Godfather». If he had a role in the film I don’t know. But a least it would be strange if he portrayed a young boy.

But what’s the truth is that the uncle of Phoenix’s singer is not an unknown person. At least in the German-speaking area. It’s the literature critic Hellmuth Karasek who died in 2015. During an interview with Rolling Stone Germany he had talked about his relationship to his nephew. Thomas has also many memories about his three German uncles.

In Germany Hellmuth is a really know personality figure. But me growing up it was hard to associate with my three uncles. Each of them was different. They had an important part in my life. There was Peter who was the youngest one. He was interested in culture and enjoying life. I loved him. Then there was another brother called Horst who was a writer. And when I started writing in English once I needed books or poems I got in touch with him. He played a big part in getting me interested in writing in English. Hellmuth was more the encyclopedia. A really fun encyclopedia. Not the kind you would keep in your library but the one you want to take out and question all the time. He was the uncle I didn’t see enough in my life. He had an incredible memory and wit and so much more.  I have a good memory of the first show we played in Germany, in Berlin. I think it was at the Columbiahalle. He came to that show and I remember the crowd was wondering what this man was doing there. They were all surprised to see him. That made a funny and awkward encounter. He was always really supporting to our band. One of the first shows that we played in Versailles a lot of people didn’t really care for the band. And I remember at the end of that show he was the first one who started clapping. He knew the potential. Yeah, he was really sweet and an extremely intelligent person. 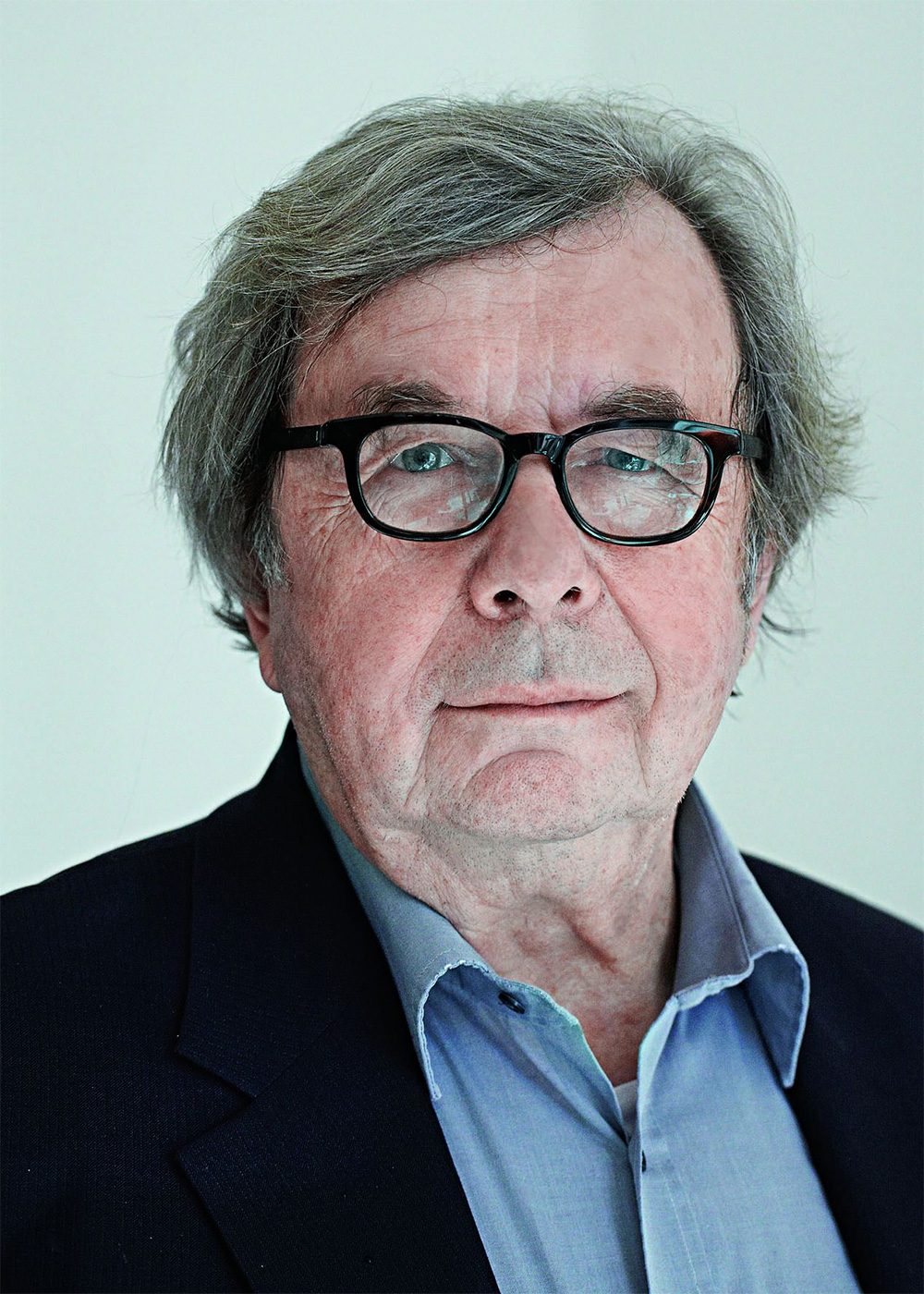 The uncle of Thomas Mars was no unknown person. The literature critic Hellmuth Karasek was known for his television show «Das Literarische Quartet» with writer Marcel Reich-Ranicki. He died on the 29 September 2015.
© Marco Grundt

A trademark of Phoenix is the red microphone cable which accompanies Thomas to each performance. When he walks down to the crow it may even get a bit dangerous for the fans. But what’s the story behind that specific cable?

The first time when we could play at Saturday Night Live was the first time we had a red cable. I had a game on Playstation which was called Singstar. I never played it but I liked the shape of the microphone. And I wanted that microphone one stage even if it sounded really bad. That had a red cable and so I liked the idea of having an iconic cable. It was my brother-in-law Roman Coppola who worked with us on a few videos. He has a great sense of style. And he knows whats iconic. I remember him telling me: „you have to have a red cable on stage!“ So, I just kept doing it. Sometimes I smash the microphone because it’s a way to tell the people that’s the end of the show. When you finish a show they ask for more. If you don’t have any more songs then it’s a clear way to tell them that it’s really the end of the show. And also when you play a live show you feel that it could be your last one. It’s the opposite of a record that has to last. A live show has to be a unique moment. To me it was punk in the most normal sense not just a mechanic thing.

The Singstar microphone became the model of the iconic microphone with the red cable. The quality of the video is quite bad but the shape is clearly visible. Their appearance on SNL in 2009 helped Phoenix to break trough in the U.S.

The guys from Versailles are touring through the world ever since. Not only the U.S. and Asia have been on their tour schedule but also festivals in Germany or Switzerland. But despite of appearances at the Paléo Festival in Nyon (2013) or at the legendary Montreux Jazzfestival (2017) they never found the way in the German-speaking part of Switzerland. Should we take that circumstance personal?

No, no. We usually go where people ask us to play. That’s the best system. You wanna be guided by that. If you’re invited then you go. But sometimes there are places where it just doesn’t work. For instance in Peru. We played our last concert there last month. We were supposed to play there for the last fifteen years. All the times there was someone saying can you come here? And it never really worked. Sometimes we were somewhere else or not close enough. Some of these things are just pure luck. We are not trying to avoid the German-speaking part of Switzerland.

The luck seems to finally be on our side. On the 21 March 2018 Phoenix are finally returning to Zurich. During their Ti Amo club tour they play a show in the Volkshaus. The touring schedule of the French band isn’t very long this time but it leads them from Brasil, to Australia, the U.S., Japan, Taiwan and some European cities. Thomas Mars told us what the fans in Zurich may expect from the concert.

Well, the whole tour we’re doing in March is not very big places. They should expect a very intimate, sweaty club performance. Which is the kind of performance I would like to go to if I attend a concert. There are not gonna be fireworks and LED screens everywhere. So we can’t hide behind the performance. It has to be all about the music. I think that’s the most exciting for us. For us it feels the closest to the crowd and what I like the most.

The price of the tickets may be quite high but Phoenix are worth it without a doubt. Especially because it will take some time to see them in an intimate venue like that. Down below you’ll find all information about the concert. 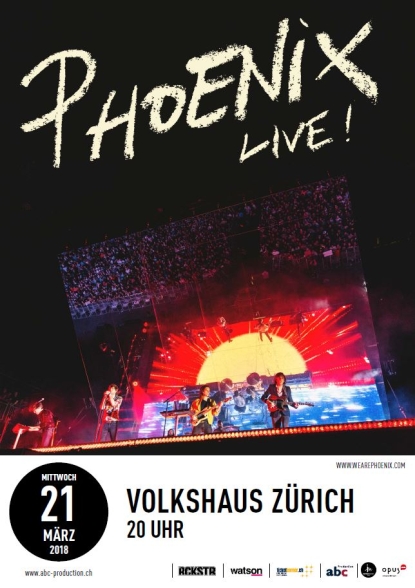