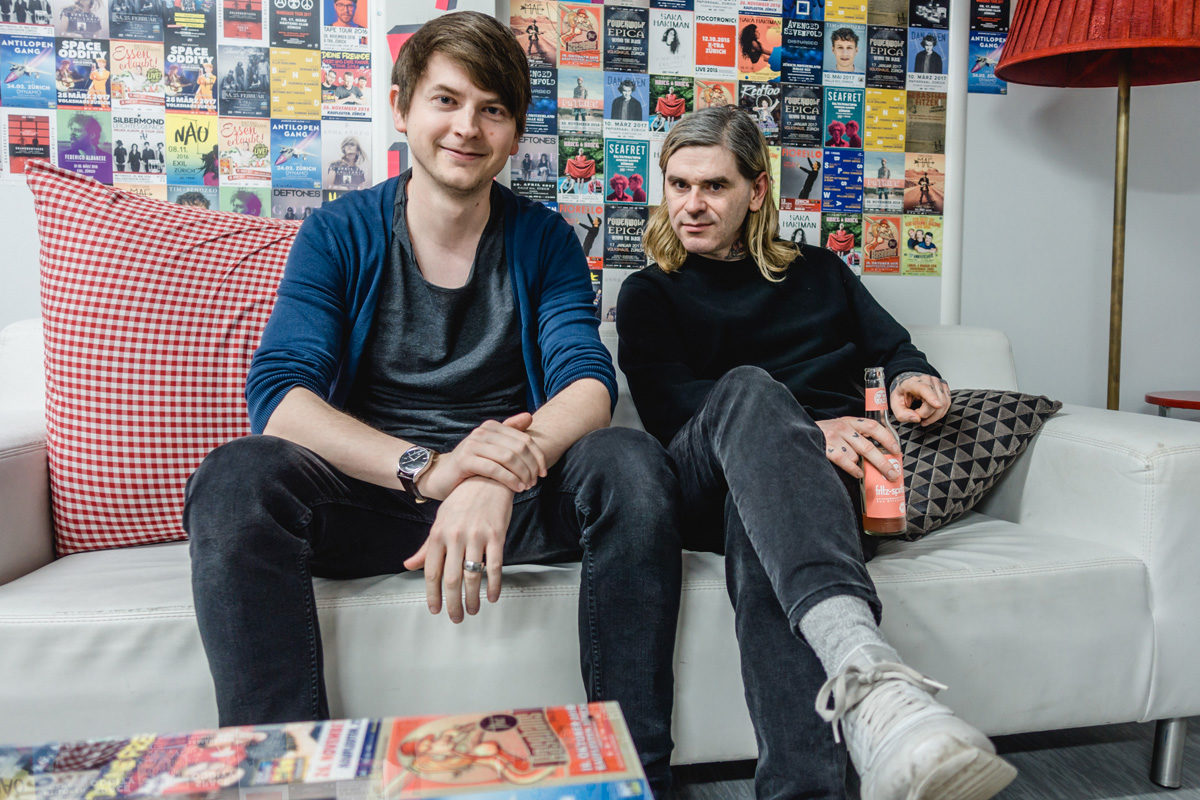 Prior to the Franz Ferdinand show in Zurich on Sunday, 11th March 2018, I had the opportunity to talk to drummer Paul Thomson.
Among other things he told where the new sound of «Always Ascending» came from and how Scottish the band really is.

Indiespect: On Friday you played your last show in Prague. That means you’ve had one day off, yesterday. What have you been up to?

Paul Thomson: We got here yesterday morning. We arrived at about 10 a.m. But we’ve slept in our tour bus. I was shaken awake and told to leave the bus because it couldn’t park there. I was having a very strange dream. So I felt a bit out of sorts for a while. I think we weren’t technically in Zurich but slightly outside.

Indiespect: What kind of dream did you have if I might ask?

Paul: It was an anxiety dream about my cats. I guess the touring is quite intense and I haven’t been home for a while. Sometimes your anxieties manifest themselves in dreams.

Indiespect: When will you be home again for the next time?

Paul: We’ll be on tour for another two weeks. Then we go home for a couple of weeks and then off to the U.S. for six weeks. And there’s Mexico in the middle which will feel like a break. Because in the U.S. a lot of the cities are quite similar.

Indiespect: Your new album «Always Ascending» was released in February. Even if it has more electronic parts then the previous ones, it’s still all played live, is that true?

Paul: Yes, all of it was played live. It’s all played in actual real time by human beings. None of the parts are sequenced. All the rhythm parts started off with me. Everything else has been added on that. 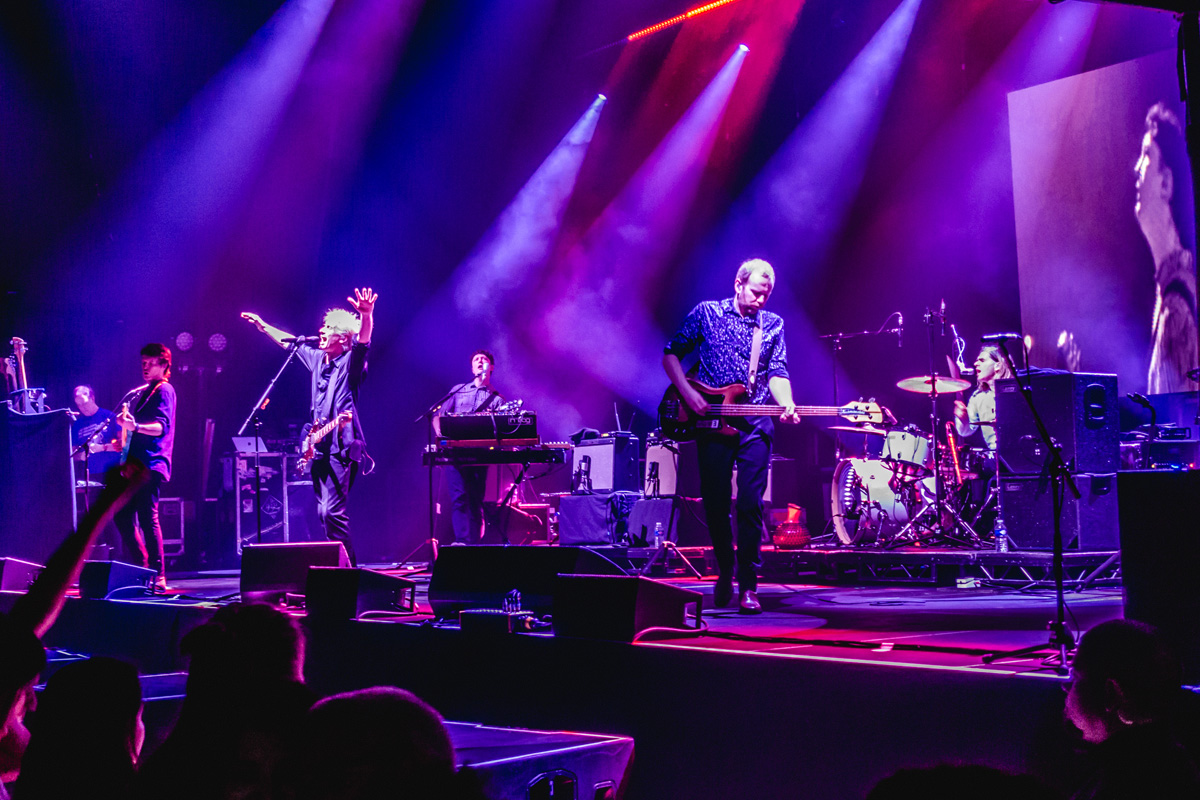 Indiespect: You can feel a bit of the FFS vibe as well in this album.

Paul: I guess. That was the previous record we’ve done. And we recorded in the same studio as well. And under similar circumstances. The FFS album was recorded very quickly. We worked on it over a long period and then rehearsed. Then we went in and tracked everything very quickly. We enjoyed that experience which was kind of the opposite to the previous two records. So we thought let’s do that again. We just spent a long time writing and arranging songs, learn how to play them as a band and then we went to the studio and recorded all the basic stuff in like six days.

Indiespect: At what point of the working process did the new members join the band? Did you already have demos of all the new songs?

Paul: Yes, we had pretty good sounding studio demos. Our studio was in Alex’s place where we did most of the second record as well. But then our producer Phillipe (Zdar) wanted to take us out of the environment where we’ve written all the songs over the course of a year. He wanted to take us to a capital city to get the flavor of that place. And it freshens up a little bit.

Indiespect: Did the sound of your songs change when especially Julian Corrie came in?

Paul: Oh yeah. If you listen to the original demo of Feel The Love Go and then listen to the version we recorded you would hear the progression. And you would hear the different personalities imprinting their DNA into it. Julian’s join was a massive thing for us. For a while there’s just been the three of us writing together. Then the whole process just accelerated when Julian joined. He’s got a lot of energy and he’s very able. He’s an audio engineer and a proper musician. Everything just snowballed after that.

Indiespect: I heard he learned the songs really quickly. Did you play «Always Ascending» with him for the first time?

Paul: We had written half of Always Ascending. We already finished the intro which is the basically the idea of the song. It’s almost half of the song. Then it just stopped. And we didn’t really know where to take it after that. That was post Julian when the second part came together. There were still huge gaps in the song. We knew that we wanted to have some sort of breakdown. We had actually inserted silence into the arrangement and I had to fill it in. Then we had to learn to play it in a way that it was fluid and that it gets a proper human flow to it. 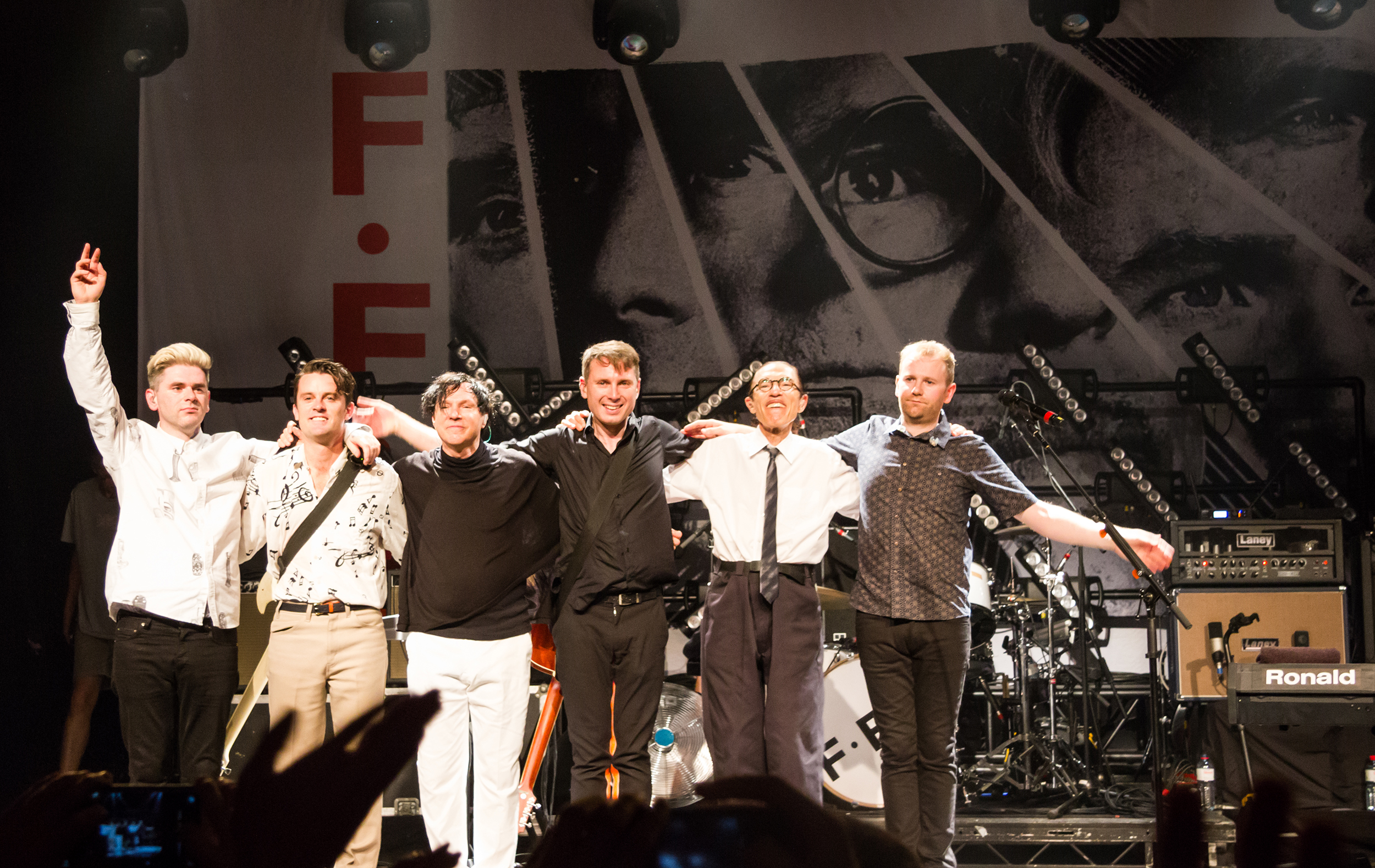 On tour together with Sparks under the name FFS. Picture was taken back in 2015 during the collaboration show at X-TRA in Zurich.

Indiespect: For «Feel The Love Go» and «Always Ascending» as well you’ve released shortened versions without the intro parts. Why that?

Paul: That’s for the radio. The label wanted us to do that. And if you get asked to do television appearances you get two minutes and forty seconds. So we actually had to go to the rehearsal studio to think what parts we could remove to arrange a new version.

Indiespect: Isn’t that a bit frustrating? Like you said the intro of «Always Ascending» is an important part of the song and for the radio version you had to cut it off completely.

Paul: It’s a little bit. But we can make it work in a way where it still flows and is satisfying for us to play. It’s just another challenge as well. From the start we always tried to make songs under three minutes long. Now we’re starting to push five or six minutes. It’s just the way the band is progressing. Maybe we have more to say.

Indiespect: Alex told that after Nick McCarthy left the band you’re the one remaining who’s the most interested in foreign languages. Is that correct, or was it just a joke?

Paul: Languages? No. I’m really ashamed to admit that. My grasp of other languages is very small. That’s some sort of a British problem. I just feel like a complete ignorant person to be in other countries and don’t be able to speak their languages. I try to make an effort and use the most rudimentary sort of phrases and sentenced to get by. The other guys speak a bit French. We recorded half of the record in Paris. All the vocals and the mixing was done there. So, we spent a long time in France. Alex’s grasp of French is more than rudimentary.

Indiespect: How did you come up to sing a song in German? You did a German version of «Tell Her Tonight» for the B-side of your single «Michael».

Paul: That was at a time where our label required B-sides. All of them were written very quickly. The instrumental part of Tell Her Tonight was an aborted version we did with a producer named Tore Johansson who recorded the first album. We decided we didn’t like it and we recorded it the same as the demo version which we did in Glasgow and Tore mixed it in Sweden, in Malmö. So, we had this instrumental version and at that time we recorded in Hamburg. That’s why we said Okay, let’t do it in German. And I said Oh, I’ll sing it. I got Nick to translate the lyrics and then write it all phonetically so that I could sing it.

Indiespect: When you would read it as a German speaking person, you almost wouldn’t understand what the words mean, I assume.

Paul: Yeah. Also to me it was just an absurd phonetic poem.

Indiespect: So, you never learned it by heart?

Paul: I only read it on paper. I mean I could do. At that time I was listening to a lot of German language music. A lot of Neue Deutsche Welle stuff. For example DAF. I was picking up a little bit but not enough that I could actually speak German confidentially to anybody. 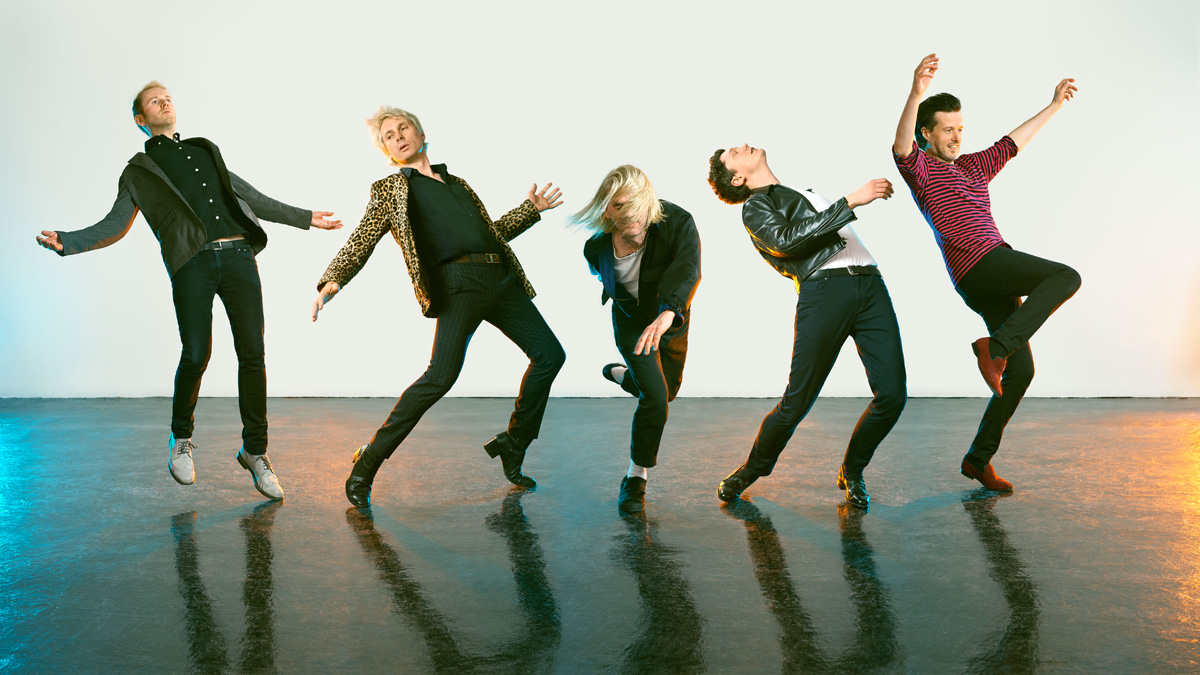 The current line-up of Franz Ferdinand.

Indiespect: Franz Ferdinand is known as a band from Glasgow. You’ve all met there but not all of you are originally from Scotland?

Paul: No. In my social group is actually not anybody who was born in Glasgow. It’s the same in London. In music and art circles you never meet anybody that’s actually from London. All of them migrate there and to Glasgow as well as a reputation for being in a city of arts, I suppose. It’s also a good city for music clubs. Daft Punk’s first single came out on a label from Glasgow. And then you got the whole Orange Juice, Josef K and Postcard (record label) scene. Well Josef K was actually from Edinburgh but the label was based in Glasgow. Also Teenage Fanclub, Mogwai etc. That is why Bob moved to Glasgow from Yorkshire. He was a huge fan of Belle And Sebastian and Mogwai. So he wanted to study there and get some of that what they have.

Indiespect: So he’d prefer to make music like «Belle And Sebastian» does?

Paul: I think he probably would, yes. Or Mogwai. (laughs)

Indiespect: I asked that, because your Scottish accent is the most remarkable within the band.

Paul: Yes. I’ve got a strange accent. Because I actually grew up in Edinburgh. I have east coast and west coast influences.

Indiespect: So that’s the accent we got to hear in the original Braveheart movie?

Paul: That’s Mel Gibson who’s Australian pretending to be a Scottish person. And he’s doing it very very badly (laughs). So, that’s not a Scottish person. It’s the same with the original Disney version of the film Greyfriars Bobby. None of those people are Scottish. They are all just pretending. Even in Trainspotting, Jonny Lee Miller is English. Ewan McGregor is Scottish. That’s his real accent. The hard man Begbie – Robert Carlyle – is Scottish as well. He’s from Glasgow.

Indiespect: Do you know your support act for tonight: CRIMER?

Paul: No. Normally I get given the job of selecting the support acts. At the moment we’re quite busy with promoting the record. I didn’t get the chance to check out any acts from Zurich. So we left it to the promoters.

Indiespect: They did a good job.

Paul: Well, that’s good. We had some weird ones. What’s he called? CRIMER? I’ll definitely watch him.

Indiespect: To finish off the interview: Do you have a favorite quote within all of your songs?

Paul: Like a lyric? I think my favorite lyrics in the record are from The Academy Award. It’s a lot of non sequitur words faded together. It makes a reference to 404 – gateway not found and then my wife is such a fan which is from Columbo. I like lyrics that are just non sequitur. But all means something a a package.