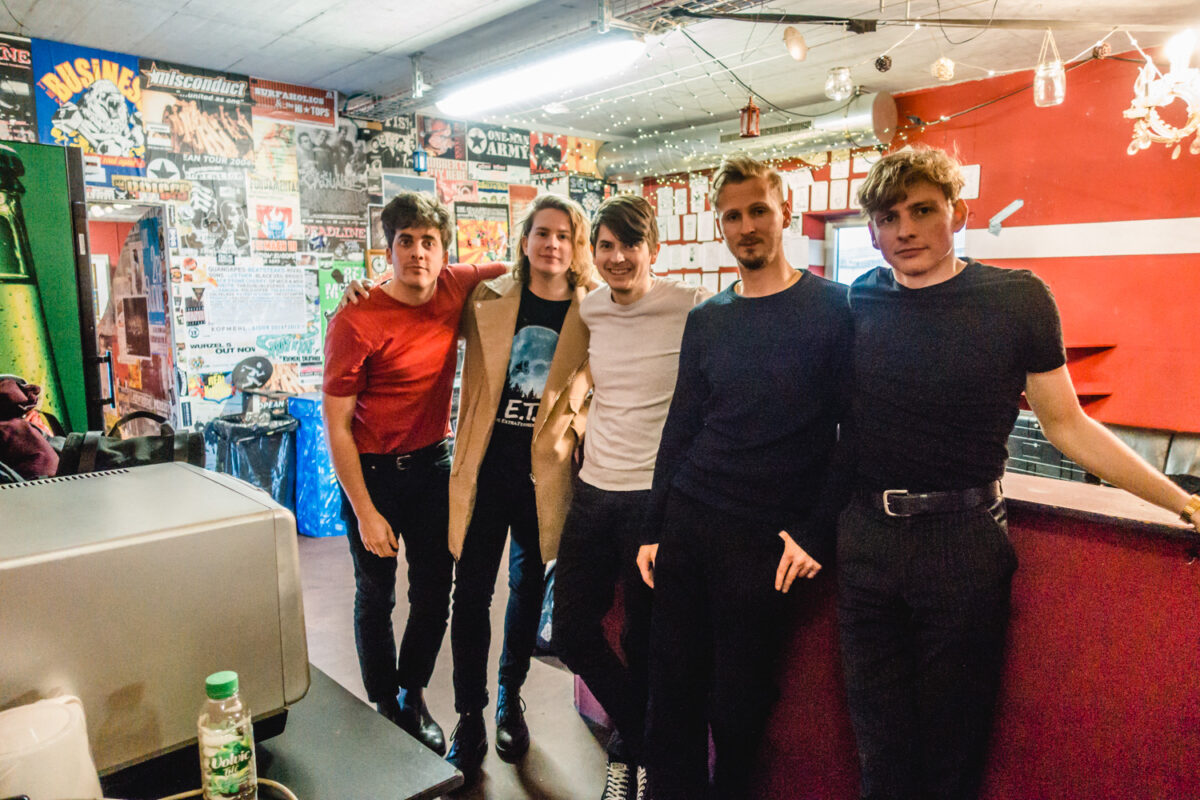 Circa Waves are a four-piece band from Liverpool. Currently their touring around Europa as support act of The Wombats. On the 5th April 2019 they will release their third record called «What’s it like over there?». Before they entered the stage at the Kofmehl in Solothurn (Switzerland) they kindly took some time to talk about their upcoming album, their ambitions as a band and much more.

Indiespect: On the 5th April you’re releasing your third record called «What’s it like over there?» I heard that it’s already finished since July 2018. How does it feel to keep it that long for yourselves?

Sam Rourke: It seems quite strange. Now, we’re already thinking about what’s coming after this. But we haven’t even put it out, yet. You start think a bit too far in advance.

Kieran Shudall: I would say it’s a gentler progression from this album to the next as from the second album to the third. I mean, all the songs are really good. (laughs)

Indiespect: It seems special to me that you are supporting The Wombats as you are a quite big on your own now. Are you testing out new material?

Sam: We’re playing two new songs. The ones that are already out. They are the only ones we play on this tour.

Joe Falconer: It’s quite a short set anyway. So, we don’t want to turn up and bomb people with songs they’ve never heard before.

Indiespect: But will you release another song before the album is out?

Kieran: Yeah. The next one’s out in March, maybe. 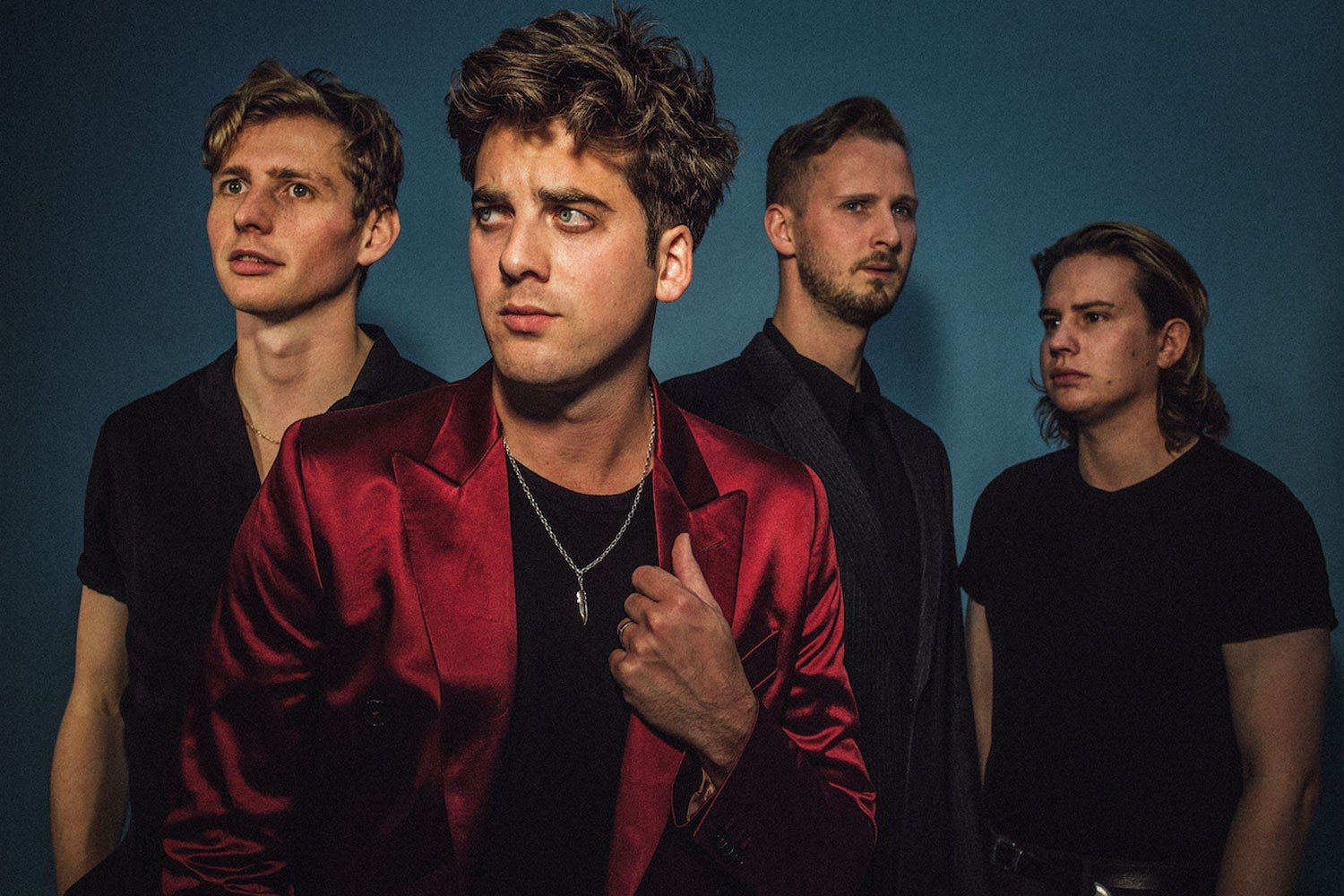 Indiespect: Will the style remain the same as on the three previous songs you released?

Indiespect: In what way? May you tell that?

Kieran: It’s all piano based.

Kieran: Sam plays piano and Joe plays bass on this one. And I play flute. No just kidding. It’s all piano and drum machine samples. Stuff like big claps. It’s really different but we like to push ourselves into new directions.

Indiespect: And to test your fans.

Kieran: Yeah. Just to see how loyal they really are. 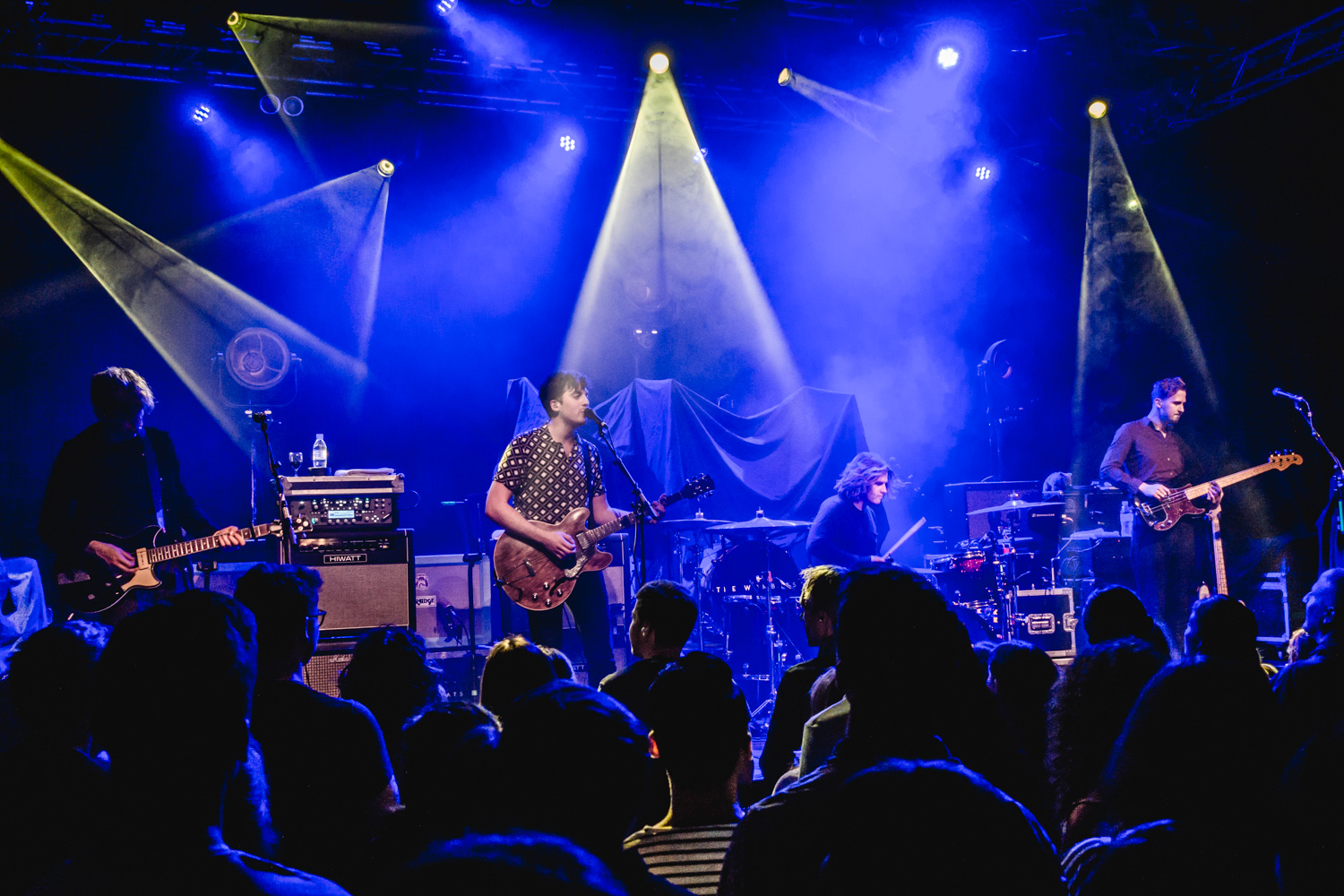 Circa Waves during their performance at the Kofmehl in Solothurn, Switzerland.

Indiespect: Sam said in an interview that he was a bit disappointed that there were no negative reactions when you released the second album. Everyone responded that well.

Sam: Oh, yeah. I remember this. I was kind of hoping it would be a bit more divisive. I feel if you want to grow as a band then you can’t take everyone with you. Because then there are fans that only like you because of a specific thing. If you’re always catering to this people you are never going to grow. If you want to go to a new place, you have to piss people off.

Indiespect: I think your progression is quite different to other bands. Some of them seem to be too afraid to change because they don’t want to offend their fans which were there from the beginning. You seem to do whatever you want, no matter what.

Kieran: I think because we got some success kind of late. We’ve all been in bands for like ten years. No successful bands. When we actually got to the point of making it, it was like: we are just going to do what we want. Because this is so mad that it happened at this point anyway. We make the music for ourselves. If people like it that’s great. But all great arts by any artist is made for themselves. If you cater to your fanbase then it only goes downhill. 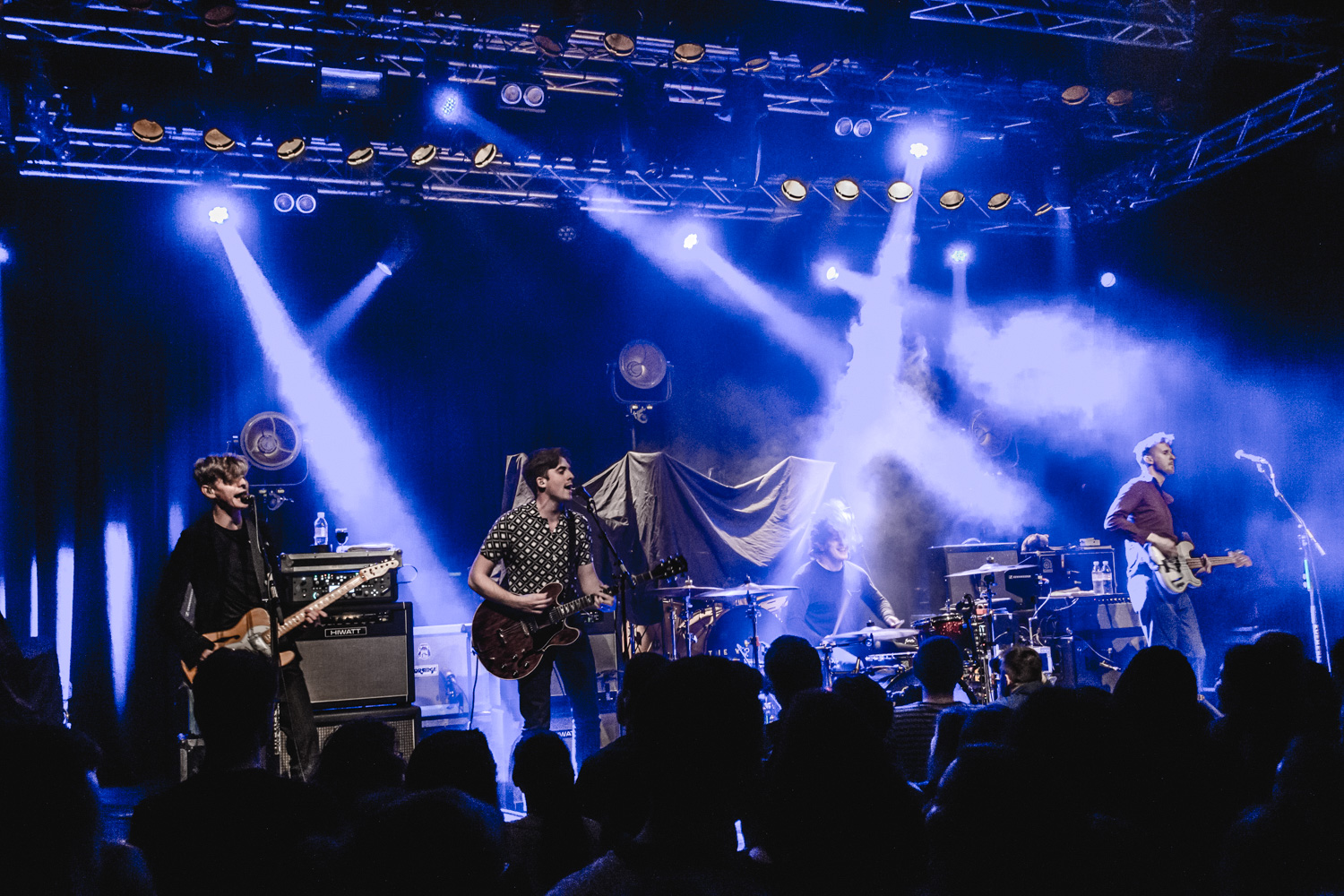 Circa Waves during their performance at the Kofmehl in Solothurn, Switzerland.

Indiespect: Your sound is getting bigger and bigger. Does it evolve that way because of the bigger stages you play on, these days?

Sam: Yes, I think so. As we go on to play bigger rooms, the new stuff is aiming at the next level up. Everytime we come back we’re thinking about where we want to be and what it should sound like. On this album we definitely tried to write an album that’s gonna hit up to that even bigger level.

Indiespect: When you played in Zurich in 2017, you got support from INHEAVEN. I think the audience really liked them as well as the critics. Do you know what happened when the told that they split up by the end of last year?

Sam: No. I haven’t seen them for a long time. They were all living in London for a while and then went to New York for a bit. I don’t know what happened.

Joe: I haven’t seen them since they broke up. I think they’ll be back in some form. They were definitely writing before, so…

«Young Chasers» was the first song to be played on Radio 1. That defined the style of the first record.

Indiespect: You are also a band from Liverpool, like The Wombats. How would you describe the music scene in that city?

Kieran: It feels more like a village than a city sometimes. It’s very insular. You can walk through Liverpool city center in ten minutes and there are maybe seven or eight venues. Certainly, if you go to university in Liverpool there is always a place to play. I grew up in Liverpool. You start playing in a small club and then you make your way up until you sell out 300 cap. venues. Everyone looks after each other and helps you to get certain gigs. It’s just a very friendly place and very cheap to live. So, you can spend as much time with music as possible, really.

Indiespect: But you didn’t go to an arts university like the guys from The Wombats?

Kieran: No, I went to college. I didn’t get into university. (laughs)

Indiespect: Do you think bands that come out of an arts school are different to bands that start out as pure fun bands?

Kieran: Not too much. I mean I studied music in college. I think a lot of the time music education is about meeting other musicians and about learning to play in a room with other people. Because when you go to college a lot of people haven’t played in bands before. You do covers, make friends and understand to write or how to record a song. It’s not necessarily about being a very studious person.

Sam: There’s loads of shit bands coming out of art schools and loads of great bands.

I think a lot of the time music education is about meeting other musicians and about learning to play in a room with other peopleKieran Shudall, Circa Waves

Indiespect: In April you’re releasing your album. But there isn’t a tour planned in Europe by now. Will you come back this year?

Sam: Things are being planned. But nothing has been confirmed, yet. So, we can’t really say. But obviously we’d love to tour in Europe if we can, as soon as possible.

Indiespect: Do you know where your biggest headline show in Switzerland was?

Joe: I think the only headline show we in Switzerland was in Zurich.

Kieran: We’ve been in Zurich twice.

Indiespect: Yes, one was at the Mascotte and the first in a club called Kinski. But this one doesn’t exist anymore.

Kieran: We shut it down.

Joe: Have we done any festivals here at all?

Indiespect: I don’t know. The first time I saw you was at the Southside Festival 2014 which is quite close to the border. When I was preparing for this interview I found an old article of mine in which I wrote about your appearance there. I wrote that you looked kind of surprised that so many people showed up that early and that you couldn’t hide your smiling faces even if you wanted to act cool. 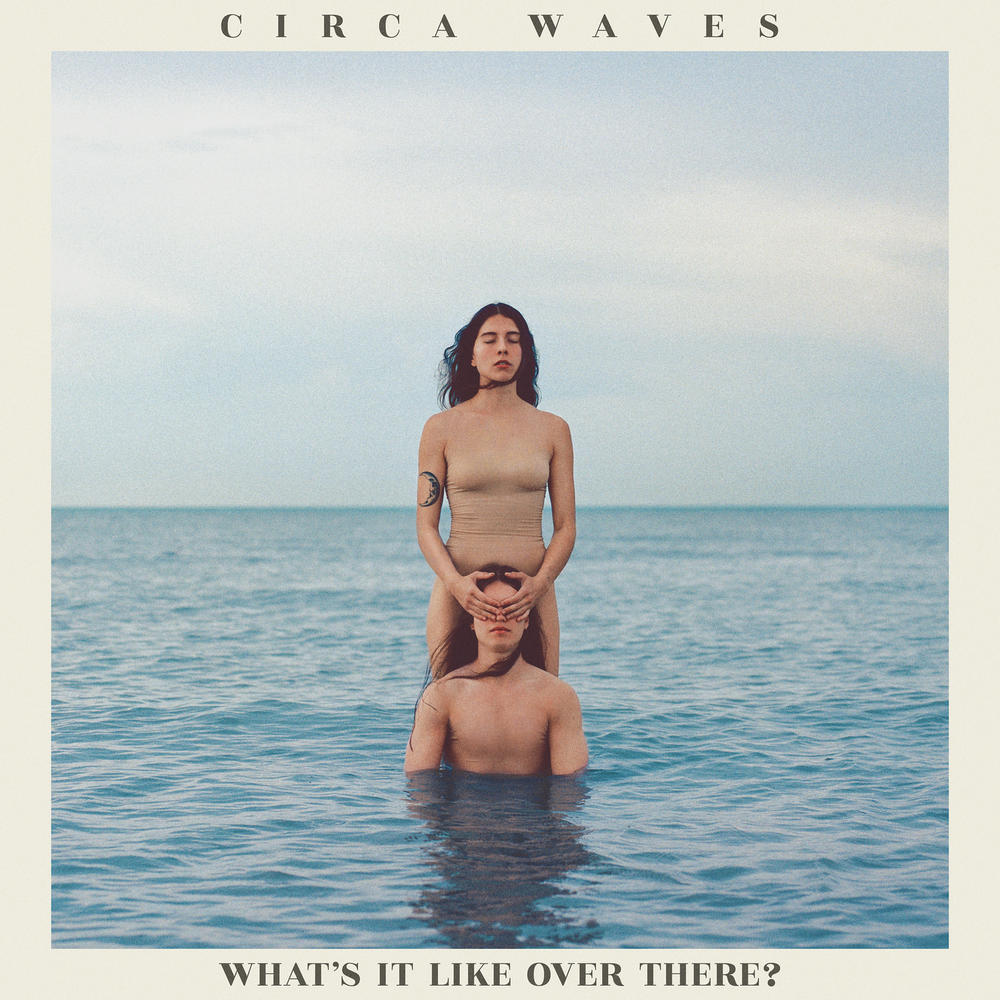 The third Circa Waves record «What’s it like over there?» will be released on the 5th April 2019. Again it will be a progression in style compared to their second release.

Joe: That was our first proper festival outside of the UK, because it was quite early on in the festival season. We’ve been a band for about a year at that time.

Kieran: I spent a lot of time to act cool but then I couldn’t hide it. Fuck, it’s like a dream come true. When you first start it’s properly amazing.

Sam: But not now.

Joe: Last night we had the first night after a day off. I was really refreshed and on stage I thought: That’s really cool, nice venue. We still get these feelings.

Indiespect: Yesterday you played in Cologne, tomorrow in Milan and by the end of the week you return to Switzerland to play in Lausanne.

Joe: Yeah, our booking agent hates us. He routes everything.

Indiespect: It’s really fascinating how fast you evolve. «Young Chasers», the first album was a proper indie rock record and the second one «Different Creatures» was heavier and more diverse. Now it seems to change again. Why are you changing so quick, compared to other bands?

Kieran: I think it’s probably my writing of new songs. I just write so many different types of songs and I can’t really decide what my favorite is.

Joe: I also think that the first album was the way it was because the first song you wrote sounded like that.

Kieran: Yes. I was never writing songs like Young Chasers. I just wrote this one and it got played on Radio 1. I was like: let’s write more songs like that. I think it’s weirder that bands just go and say: well, all right we are only gonna write this songs forever. That’s weird to me. Back in the day when bands were releasing records every six months, they changed more rapidly because you get away with it more. But it surprises me that not more bands do it this way nowadays. It seems a lot more natural to me, to move on and write different styles. 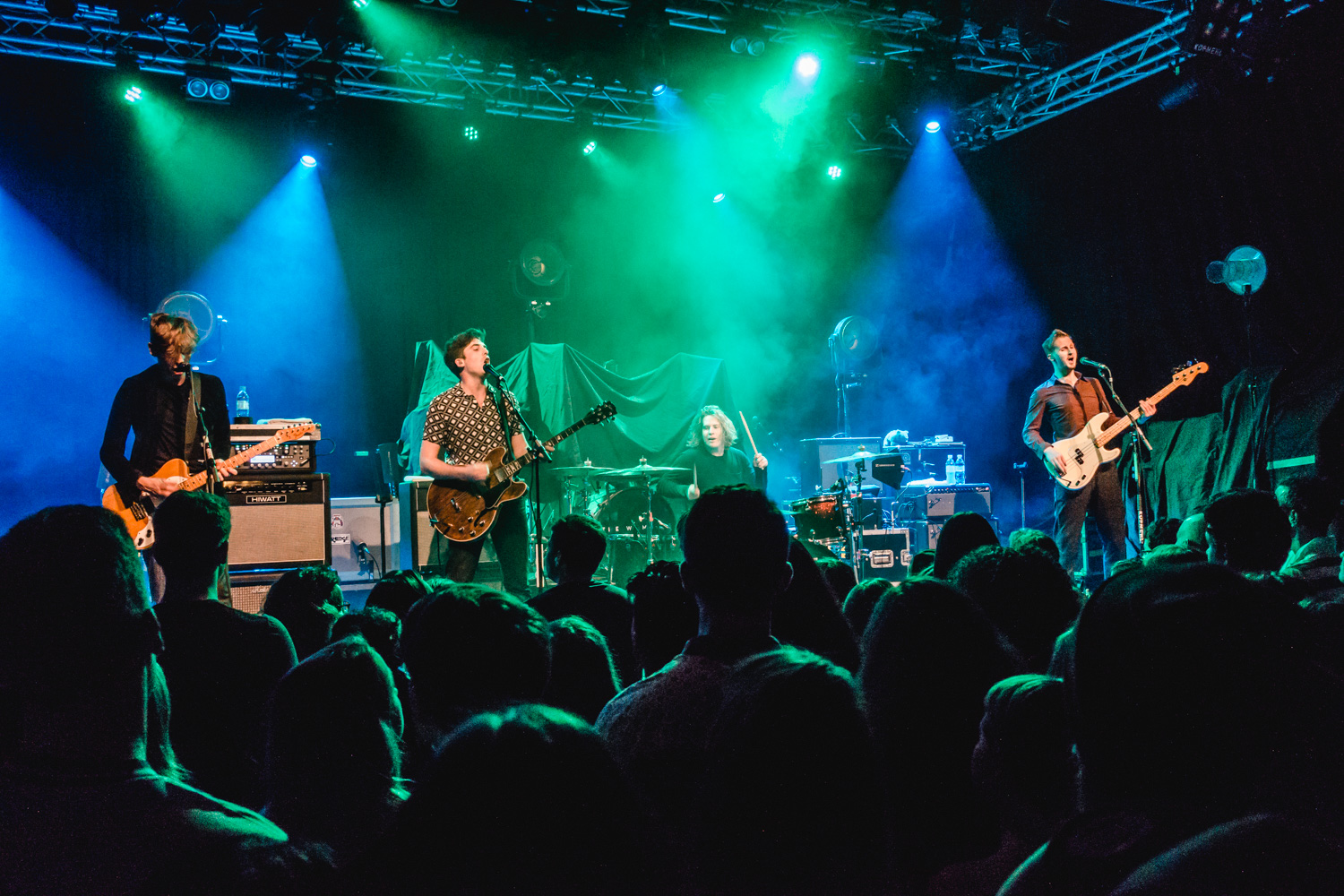 The four-piece wants to extend their fanbase, across the genre borders.

Indiespect: You told in an interview that Spotify and the playlist culture is responsible that there is more mixing of the genres in new music. So maybe you will sound completely different in ten years. Hip Hop, maybe?

Kieran: Yeah, gangster trance. The way Spotify works or playlists in general suits us in a way. Because we’re quite varied and we’re quite in a few different random playlists. But we just do what we enjoy making.

Indiespect: So you will have a more diverse crowd at your concerts, not just the specific indie rock fan.

Joe: Yes, exactly. When we first started, people were quite quick to label us as a certain thing. And I think none of us really enjoyed that. If you don’t get yourself pinned down to one thing you can get an identity a lot quicker and build your own thing.

Indiespect: You chose to work with producer Alan Moulder again like you did on Different Creatures. Why is he the steady part in your dynamic change?

Sam: Certain kind of producers can try to impose their style on a band or on a record. Alan just really tries to make the thing we want the best way it could be. He’s not trying to make the album he wants. That’s really good for us. We obviously have a quite good idea where we want to go with it and he’s just amazing in making that sound perfect. We would find it frustrating if it would be a battle between us and the producer.

Indiespect: Thank you so much for your time!