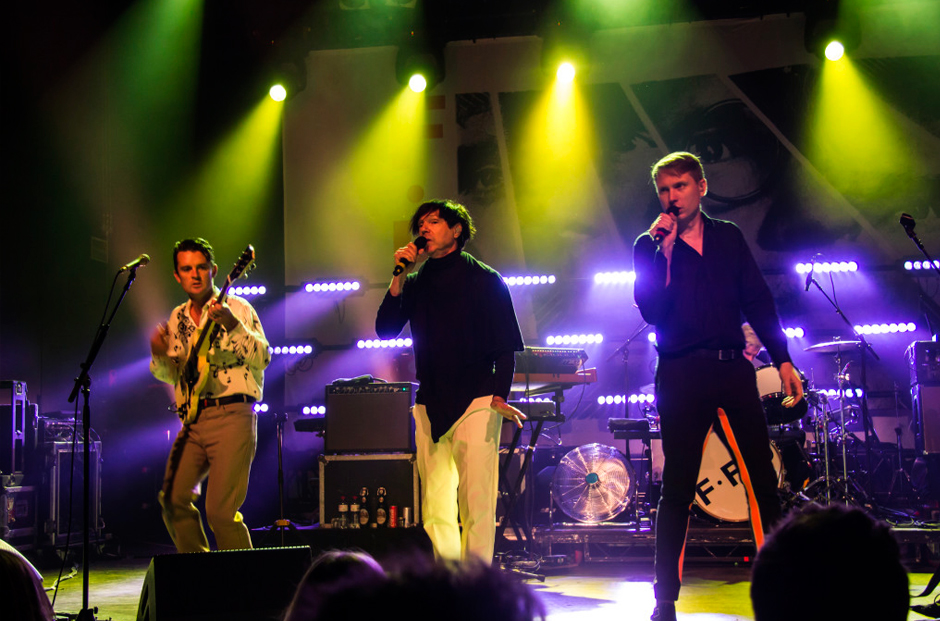 Shortly before the concert of FFS in Zurich on the 2nd September 2015 I had the opportunity to talk to Bob Hardy (bass) and Paul Thomson (drums) about their new collaboration. 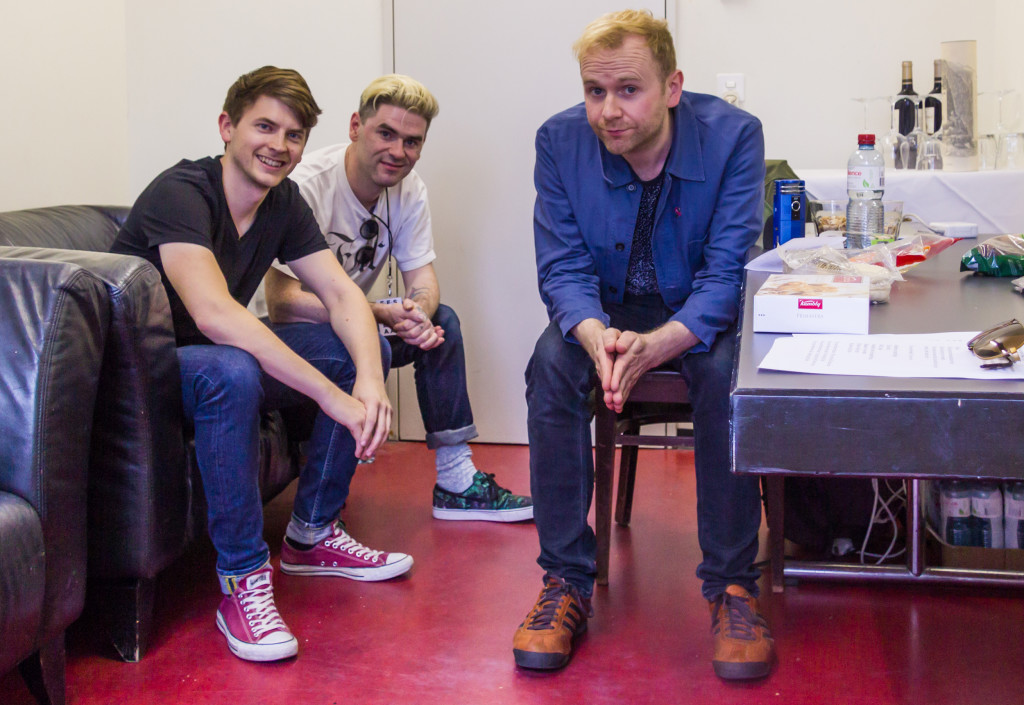 Indiespect: You had to cancel your planned show in July. Do you remember what happened then?

Bob Hardy: We had some problem with the logistics, trucks and things.

H: But here we are today. Isn’t it a lovely day?

I: In FFS interviews you often hear and listen the story, of how Alex and the Mael brothers met. What is your point of view on how the collaboration with Sparks started in the first place?

T: But whats your point of view, when Alex met them in 2013 in San Francisco? He just bumped into them.

H: Alex asked us, do you want to go to the Sparks show tonight? Yeah? Okay. And then, we watched the show – it was brilliant. We went backstage afterwards and it was like: we haven’t seen for ages, how are you doing? The Maels were kind of winding down the collaboration thing. And we said, oh no we should do that! Then we started to e-mail and the mails went back and forth quite quickly.
But after the gig, we went to this cocktail bar, the Sparks didn’t come, but we did. It was directly next door to the venue – do you remember?

T: Oh yes, it was the Elbo Room in San Francisco.

H: And gosh – those cocktails were strong. I had the worst hangover of my life. The next day we played a concert, and I thought I’m gonna die.

T: We played a tiny basement show. There was only one tiny staircase and it caught about a 100 people.

I: How are you able to play shows with such a hangover. Is it even possible?

H: It’s possible, yes. But it’s not ideal. That’s why I don’t drink so much anymore. It’s not ideal, but you can get through it. 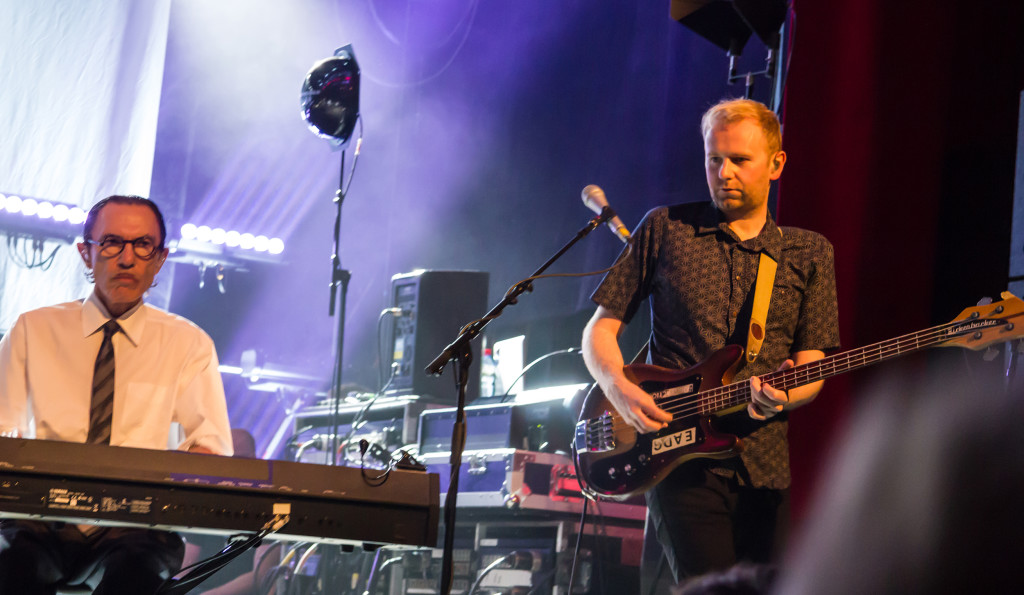 Ron Mael and Bob Hardy during the FFS show in Zurich.

I: Do you think the collaboration with Sparks will change the style of Franz Ferdinand in the future?

H: I think it’s difficult to say the style of music, more the approach to how we record might change or certainly go back to how it was, when we first started. This record was recorded very quickly, because we did all the preparation beforehand. We went into the studio for fifteen to sixteen days in one block. And that was it – okay finished. That was a very nice way to work. And that’s how we did our first album. Since then, we’ve kind of gone away from that model a bit and now we would like to go back to that in the future.

I: Was it clear in the first place, that you would write in separated places?

T: This was logistically. I don’t think we would have been able to do it, when we were all in the same room to write. Like this we could just e-mail this things and then hear back from them two days later

H: Also because of the time difference aswell. Occasionally you’d wake up in the morning and there’d be a new song, which was delivered over the night. And when you reply they might be in bed. It’s a long and slow process, but it’s nice.

T: The time difference didn’t work so well, when we wanted to promote the record and stuff, that was a pain in the neck. But for writing, it was a refreshing way to work for us, anyway. Sure it was for Ron and Russel aswell.

I: Can you think about other collaborations, that worked as well as yours with Sparks?

H: Let me think. Well, I quite enjoyed the Mouse On Mars and the Mark E. Smith collaboration (Note Indiespect: They worked under the name Von Sudenfed and their album «Tromatic Reflexxions» was released on Domino records – the same label as Franz Ferdinand). I also enjoyed «Under Pressure» by Queen featuring David Bowie.

T: I guess a lot sorts of pop music, r&b, rap and reggae is all collaboration. There are at least fifteen collaborators one one record. But with guitar music I guess, it’s less common.

I: Could you imagine to work with another band in the future or is the collaboration with Sparks the only one you will do?

T: It kind of works well, because it’s two of them and we don’t have a dedicated keys player. And the two vocals connect actually. Luckily, because we didn’t know, how this would work out or how to approach it until later on in the process. Alex and Russels voices meshed together quite well, because they have completely different ranges. We thought that they would sing in lines. Russel sings one line, Alex sings the other. But in lot of the songs the two of them sing simultaniously – sometimes like ABBA. 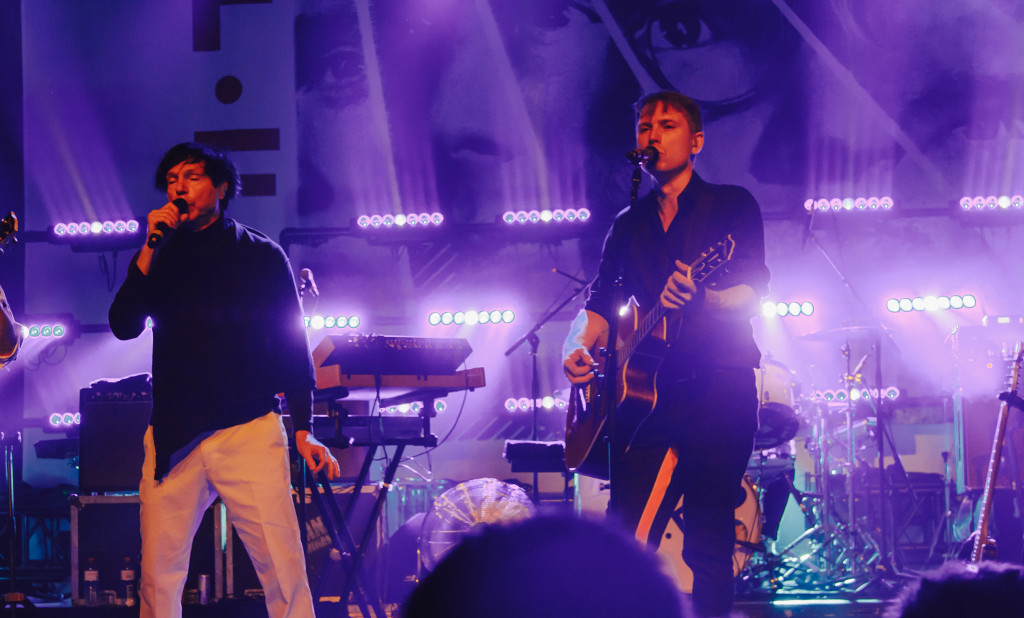 H: Working with a four piece band, that has a bass player, a drummer and a guitar, wouldn’t work. I mean two drummers on stage, who wants to see that? Two bass players maybe… (laughs)

I: Bob, I heard that your first bass guitar was actually a gift from a former member of Belle & Sebastian to Alex Kapranos – is that true?

H: Yeah, that’s right. From Mick (Note Indiespect: Mick Cooke used to play for fifteen years with Belle & Sebastian). He also used to play in an old band with Alex.

I: And you didn’t want to play bass guitar at first?

H: Not really, no. If it’s not something, I’m good at immediately, then I don’t like it. And you have to really concentrate, when you are first learning to play a musical instrument. I did it for social reasons really, cause it was fun to hang out and to go to the pub afterwards. Rehearsals were something to get through and then we used to go to the pub.

I: So, it was like that in the beginning?

T: It was like that for the first few years (laughs). Now we love to do this. 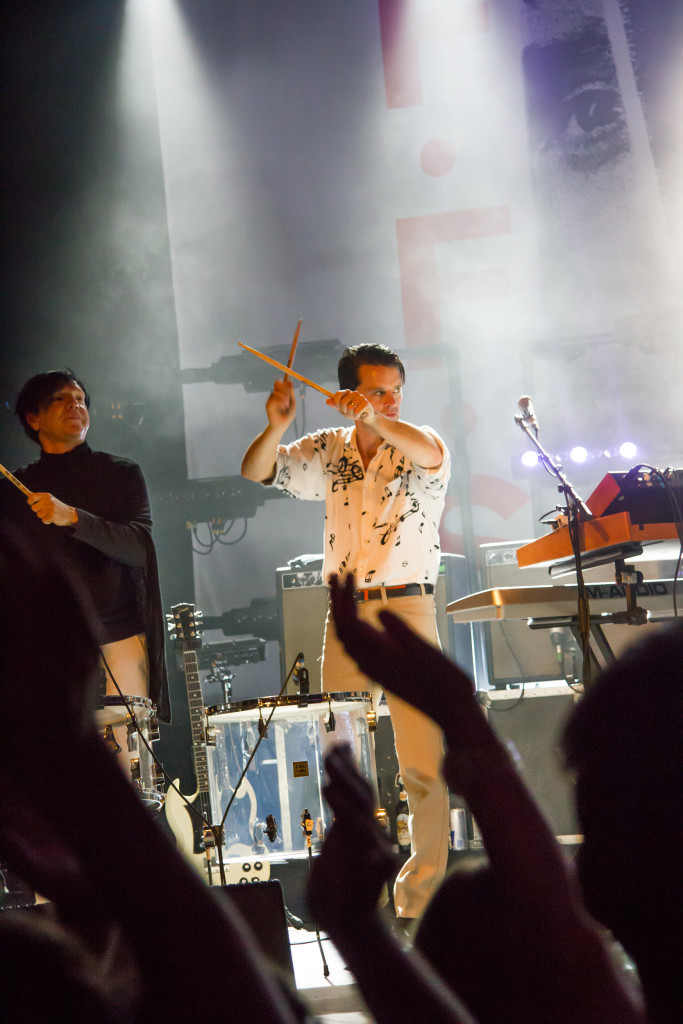 Nick McCarthy asserted to play drums in the beginning, to be able to join Franz Ferdinand. When it was clear, that he lied, Nick switched places with Paul Thomson.

I: So, you found your positions by now. I heard that you (Paul) played guitar in the beginning.

T: I played drums in previous groups, groups with Alex actually. And I’ve been in a group for a while, where I was the frontman and produced my own stuff. I quite liked to be at the front, so I didn’t want to go back behind the drums again. That’s why I said, okay I choose the guitar. I play guitar a bit, but not particulary well. I just wanted to do something different. We went forming a band just for fun. Just something we do, when we hang out, play cards and get drunk.

I: But there was also a time where you didn’t want to see each other for a while?

H: We had a very busy few years, in 2003, 2009 or 2010 even. After that we had a little break. I still saw Paul. And we all live in different cities. That’s a normal thing to do, if you’re living with people and working with them. You just need some space sometimes. 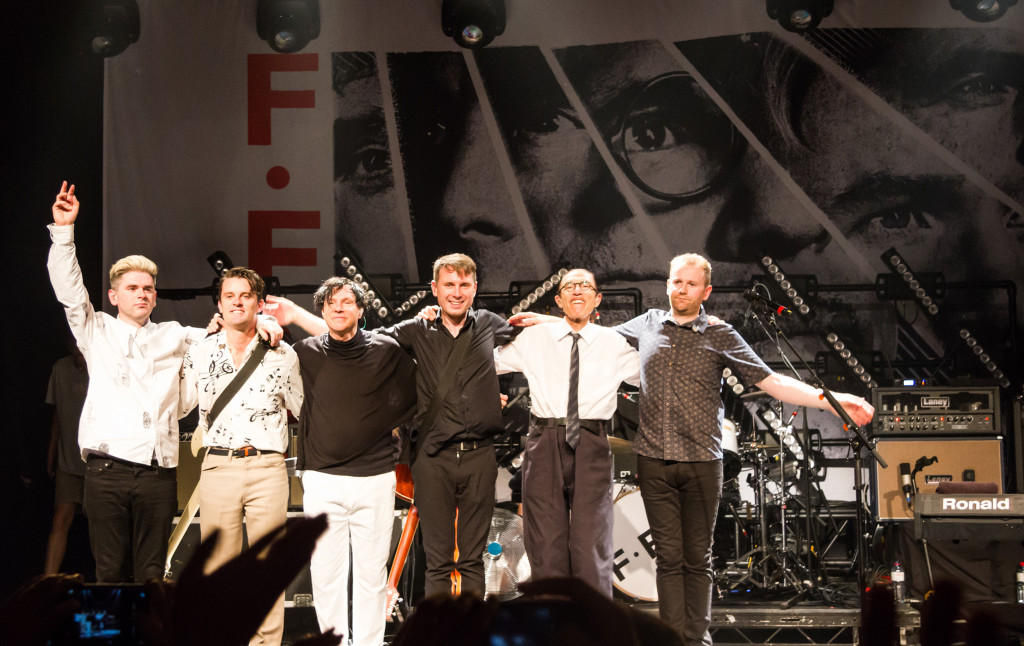 FFS proof, that collaborations do work.

I: I’ve read a review on Pitchfork.

Paul holds his ears and makes noise to not hear anything.

I: It seems like you don’t want to hear it. So you don’t reviews anyway or only not the ones from Pitchfork?

T: Yes.. Reviews.. Who writes good record reviews? Just someone who is really passionate about music. People, that write it for the right reasons. When they like music, like we do. Otherwise I ask myself, did you enjoy music? What are you getting out of this?

I: I see, wrong question. To talk about other things, are you already working on new material for Franz Ferdinand?

H: Yes, some things. But were still doing this with FFS right now.

I: I had one question prepared for Nick but he is not here.

H: We can answer it for him!

I: I read that he was named «Nick McCarThief» when he was young, because he stole a car.

T: He was a country boy and lived in Bavaria. Who came up with that? Nick’s brother?
Nick onece told me, that when he was young, his little brother shot him into his testicals with an air rifle, when they were growing up. But you know, he has two children now, so no damage was done.