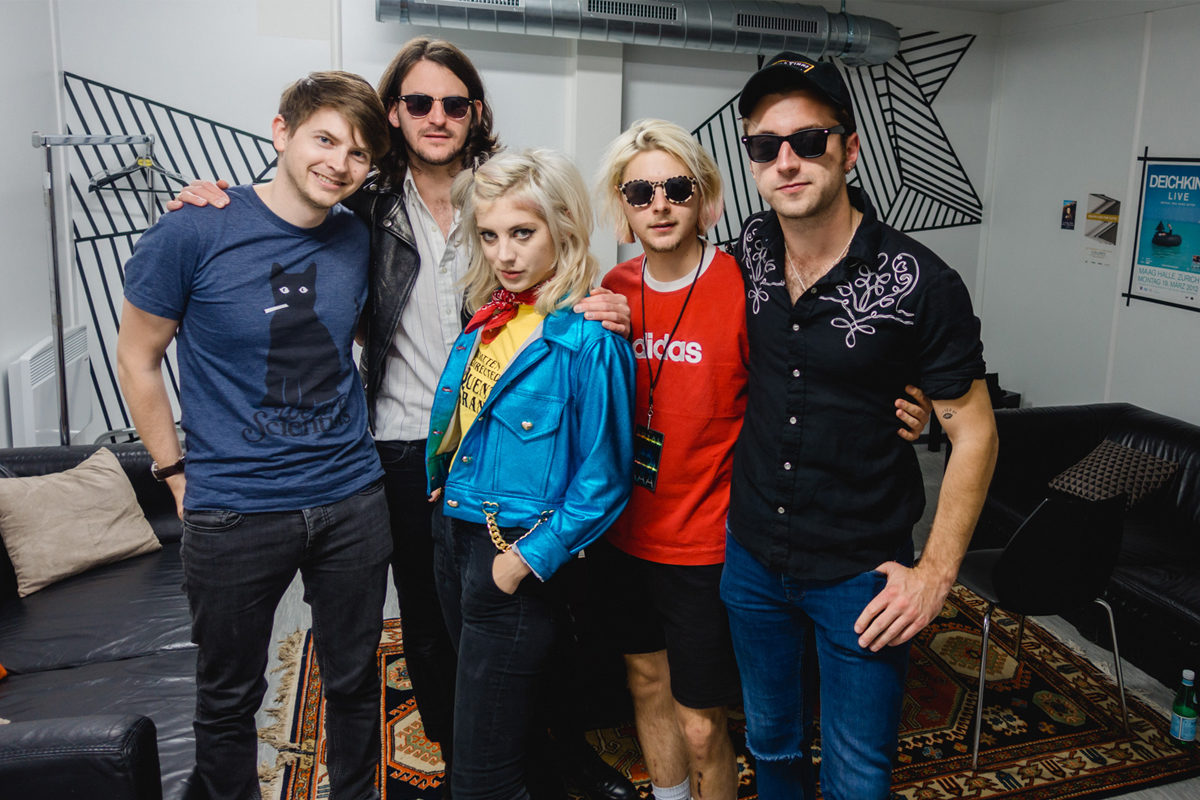 Black Honey are currently supporting their Brighton mates from Royal Blood. Before their planned gig in Zurich I had the chance to chat with the four-piece. The concert later that evening had to be cancelled and rescheduled due to food poisoning within the Royal Blood crew. The show will now take place on the 19th December this year. At the time the interview took place everybody was optimistic that the concert would take place as planned.

Indiespect: Your mates from Royal Blood cancelled all of their interview slots today because they don’t feel well. Do you know what happened to them?

Tommy Taylor: I think the other guys have food poisoning. They went to a really nice restaurant somewhere in Milan yesterday.

Chris Ostler: They had oysters, didn’t they? Oysters are always a bit dodgy.

Indiespect: But they don’t have to cancel the show, do they?

Izzy Baxter: No, nothing has stopped the show. The show must go on.

Indiespect: I heard you just got up?

Izzy: Yes, we haven’t even showered. So sorry! We had a bit of a big one last night. After the show Ben and Mike came out to our bus to have a few drinks and then we got pretty drunk. Then we decided to drive across Milan to visit our friends Slaves in their Raddison Blu hotel. It was really posh and we had to be really settled when we arrived in this huge bus. As we were getting out of the bus Chris kind of fell out.

Indiespect: I wouldn’t be as fit as you if I had such a wild night out. Did you learn that on tour?

Tommy: Yes, we get really good at it.

Izzy: Ben and Mike would train us through a lot of paces. We’ve been through a boot camp.

Indiespect: Are they worse than you?

Tommy: Oh yeah. Or better. It depends which way you look at it. 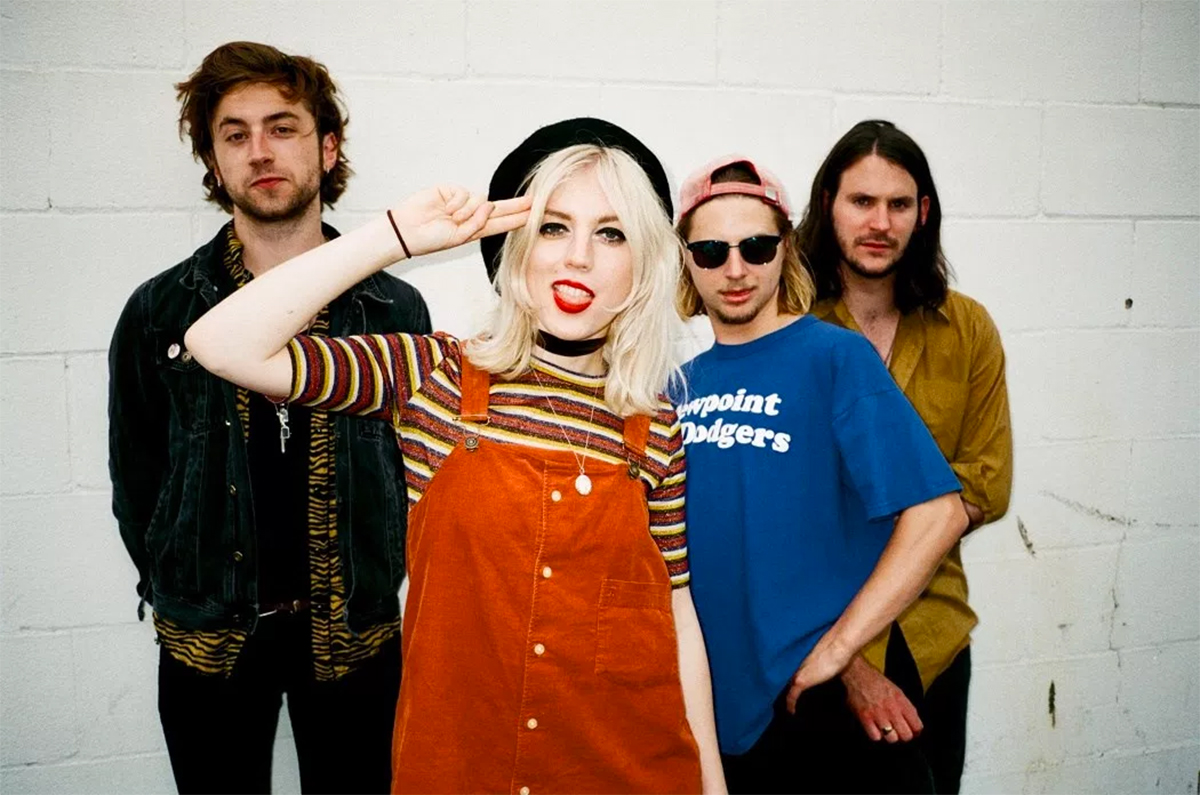 Indiespect: What’s the best part of being on tour with Royal Blood?

Tom Dewhurst: I think them. The two guys. I like hanging out with them. They’re funny.

Izzy: They feel like part of the family. Because they’re from Brighton as well. They just come in our bus or our dressing room. It feels like they could be in our band. It feels really close. They could be the next two members.

Indiespect: Where did you get to know each other in the first place?

Izzy: In Brighton. I remember seeing Mike and Ben at one of our really early gigs in our studio. It was a tiny gig, about the size of this dressing room. That was just before they kind of exploded. Ben also was a really really good friend of a guy who used to put on a really horrible pop club night called bars and pop where everyone went to. It has always been trashy pop music, it was the best. We went there every Thursday. I remember Ben was giving everyone stamps at the door.

Indiespect: I have to admit that I didn’t know you before you were announced as support act of Royal Blood. Then I checked you out and I saw that you already have quite a lot of songs out. All of them are really great. But there is still no album around. And since over a year you tell everybody that you want to grow a bigger fanbase and to wait on the right moment to come out with it. Do you know when you will release your debut by now?

Izzy: We can officially tell you that our album is coming out next year. We’re aiming for summer. And we’re definitely back in Switzerland before that. We played our first ever festival in Switzerland this summer at Openair Gampel which was amazing. An incredible thunderstorm came in. We were on stage watching Seasick Steve. And it was the sunniest hottest day ever. It was beautiful and we had the best time in the mountains. And minutes later literally the heaven opened. The whole main stage was rattling and all of the flags got blown over. It was sideways rain. Crazy shit – it was biblical. We had eight portions of raclette that day which was probably my highlight.

Indiespect: So you’re  also having fondue or raclette for dinner today?

Izzy: We hope so. If not we will melt some cheese in the van in the microwave.

Indiespect: Since a few days you are teasing the fans on your Facebook page with the words RIP and the date 10.11.17. What is this all about?

Indiespect: So you return to Switzerland in spring just to eat cheese?

Izzy: Oh, you got us there. Basically our next single is called Dig. It’s a death theme single. Not in a morbid way. More like thinking about death makes you challenge your own experience of life. We talk about death imagery and religious imagery in a lot of our songs. Having the challenge of the narrative of death and the way it’s glamourous. Death is part of the cycle we live in. For example the death of the leaves. Everything recycles itself in the whole experience of the universe. Really deep. (laughs)

Indiespect: Your song ‘Spinning Wheel’ sounds like a perfect Tarantino tune. It’s a mixture of Dick Dale and Nancy Sinatra. Did you want to catch his attention with that one?

Izzy: I mean if you could give him a ring…

Chris: Maybe he can do the video.

Indiespect: If he would call, how would you react?

Tommy: Silence, I think. I like to think we would be really cool, but we wouldn’t.

Izzy: I think I would cry.

Indiespect: I found several interviews with you, all of them in English. Also the written ones. So I’d like to present you to the German speaking readers as well. May you tell me something about your band history? How did everything start?

Chris: We all met a long time ago. We’ve been friends for years and years. And we’ve all been into the same music. We lived in Brighton. We’ve done various different projects before. Black Honey didn’t fall out of the sky. We made a lot of mistakes before in our other bands and learned from them. And three years ago it fell into place.

Tommy: We all played in different bands for a while. Then this one happened and it stuck.

Chris: Something went right, didn’t it?

Indiespect: You have the same vision as a band? You want to take your time before releasing an album.

Tommy: We didn’t think there is too much point until you have an audience that wants to hear it. We never wanted to put the first ten or twelve songs we’ve written onto an album.

Chris: You only got to do your first album once. So you want it to be the best you can make.

Indiespect: I heard that you’ve got already about 80 songs that you recorded?

Indiespect: When you release your album next summer, will it contain the songs you already recorded or is it all new stuff?

Izzy: We’re gonna make a deluxe. So it will be a mixture of new stuff and some of our favorites of all time on the main album. And the deluxe is gonna be like everything we’ve released. Some exclusives and some really fun stuff in it.

Indiespect: My next question you answered already in the beginning of the interview. You said that you will come back to Switzerland after your show with Royal Blood. This will be next year?

Izzy: Next year. Nothing is in the calendar yet but we’re hoping to get on the road in spring. We also have plans to go more international. We will go to America next year, go back to Japan again…

Indiespect: Japan is a good keyword. It seems that every band loves Japan. What does this country make so special?

Indiespect: They also give a lot of gifts to bands. Have you also received something special?

Izzy: We didn’t get so much. We got a few drawings and stuff at our club show in Harajuku. But I think next time we go it will be different since we play festivals. People just take photos of you in the streets just for being blonde.

Tommy: We also sign a lot of weird things. In Korea as well. We were signing expensive handbags and phones. The actual phone not the case. Weird.. but kinda cool!

Izzy: Half of the people don’t know who you are. They’re just getting stuff signed because everybody else does.

Tommy: We just love it. The culture is so different and it’s such an experience. As soon as you get off the plane it’s like a whole other world.

Indiespect: So maybe you have to release a special Japanese version of your album with bonus tracks like all the other bands do.

Tommy: Maybe our normal album will be the Japanese version so that everybody can get all the tracks.

Indiespect: It was planned that I have an interview with Mike from Royal Blood afterwards. Do you know anything I could ask that he doesn’t expect.

Tom: Ask him if he thinks they sound like White Stripes

Indiespect: He seems not to like this question. But today I will not get the chance to ask him anything because the cancelled all the interviews.

Izzy: Everybody in their crew has got really sick. There’s been a bug going round.

Chris: We’ll ask a question for you. Should we interview them with your questions and film it?

Izzy: They would hate you soo much!

Indiespect: We don’t have to be afraid that the show won’t happen? Or otherwise you’ll fill out the headline slot with all of your songs?

Tommy: That was our plan. We poisoned them. A real masterplan.

Izzy: Our new single comes out on November 10th. And it will be available on all streaming, social platforms in the internet.

Indiespect: Thank you so much for your time.