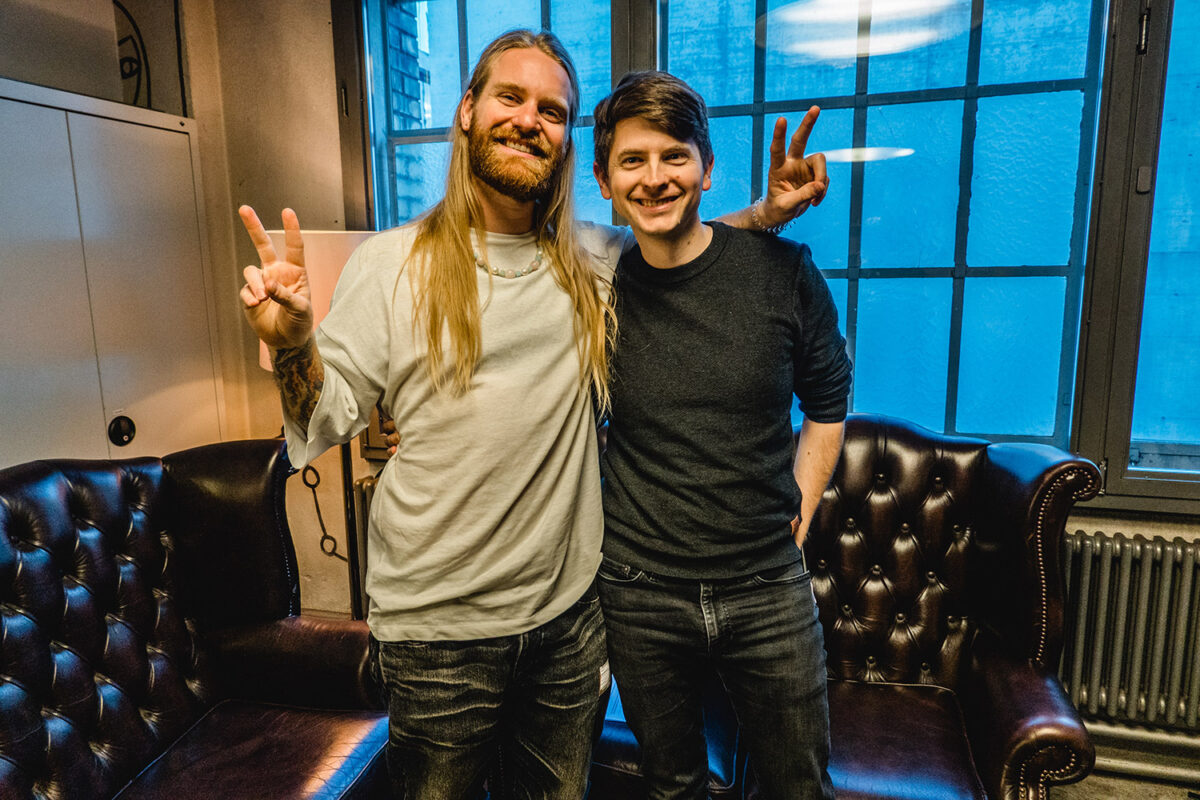 Sam Ryder has played on bigger stages than many musicians that are way longer in the game than him. This is despite the fact that he hasn't even put out a single studio album, yet. Participating in the Eurovision Song Contest with his song «Space Man» has opened some big doors for the Englishman, and he's gone through each one with an infectious energy. Now, his debut album «There's Nothing But Space, Man!» is about to be released. Ahead of his first show ever in Zurich, the singer explains how he manages the balancing act between Wembley Stadium and clubs and how his experience as a wedding musician has helped him in his further career.

Indiespect: You postponed your tour in spring because you took part at the Eurovision Song Contest for the UK. Maybe the best decision ever?

Sam Ryder: Yes. Yeah. Turns out it was. (laughs)

Indiespect: Since then, some big possibilities came up for you. In September, you played with your all-time-heroes Queen at the Taylor Hawkins Tribute concert at Wembley Stadium. Some months before you performed in front of the Buckingham Palace for the Queen's Platinum Jubilee. How did that all feel for you?

Sam: Incredible. I can't say we expected any of it. It sort of came along and fell into our lap, so to speak. But these were massive milestones and the sorts of things that even if you've been lucky enough to enjoy a long and vast music career, you might not experience moments like that. I count myself incredibly fortunate that we would have to celebrate that milestone for the Queen. 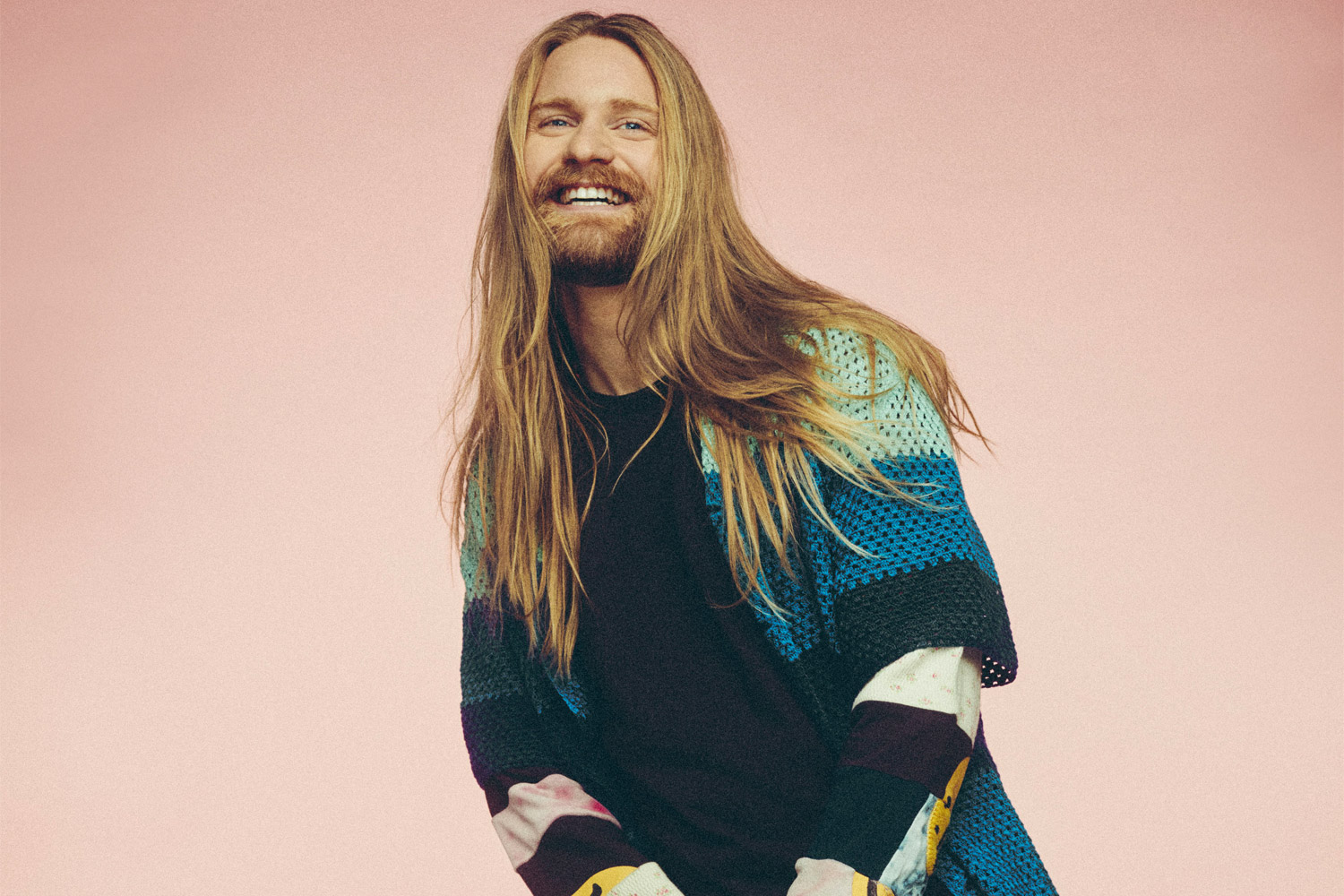 Sam Ryder broke the ESC curse for the United Kingdom

Indiespect: Even though you have millions of followers already on TikTok, it's something completely different to play to such a big audience. How did you handle stage fright and things that go along with it?

Sam: I worked on changing my nervousness to excitement. So every time I felt nervous, I just told myself I was excited and that seems to work. And that's become a habit now. So I haven't felt nervous for a show in a long time, probably this whole year. There's not been one show that before going on stage I've been nervous about. I would definitely recommend that to anyone that suffers with nerves in any way.

Every time I felt nervous, I just told myself I was excited and that seems to work.

Indiespect: Was it at the Platinum Jubilee concert where you met Queen for the first time?

Sam: I didn't actually meet them there because they had to go straight after that performance to one of their own shows. My first time meeting them was before the gig at Wembley Stadium.

Indiespect: But obviously Roger Tayler knew about you because he asked you to perform with them?

Sam: Yes. They must have seen my videos online, I think. I know they did. Roger and his wife had been watching my videos for a long time, apparently. So there was support which was really cool.

He came, saw and shone. Sam Ryder at the Late Queen's Platinum Jubilee Concert in June 2022.

Indiespect: It's not a long time now until the release of your debut album. I saw that it also contains some of the songs that were already released before – like «Whirlwind» and «Tiny Riot». When I checked out some of your recent setlists I noticed that «The Sun's Gonna Rise» is not on there and it's also not on your album. Is there a specific reason for that?

Sam: I didn't want the album to just be full of all the songs people had heard before. That would annoy me if I was a fan and I'd enjoyed the EP. But I released it – god knows how long ago – I can't remember exactly when. Maybe last year. It would feel like a cheap shot to have every song from the EP on the album. It would only realistically leave room for like four new songs and that just doesn't seem worth the wait. But there were some songs that I feel have more potential, like Tiny Riot and Whirlwind. I think I don't have many songs like Whirlwind and it covers an emotion that was needed on the album. So that's why that's on there. But ultimately, I wanted space for new work and songs I hope the people, that have been fans of the project, will enjoy. 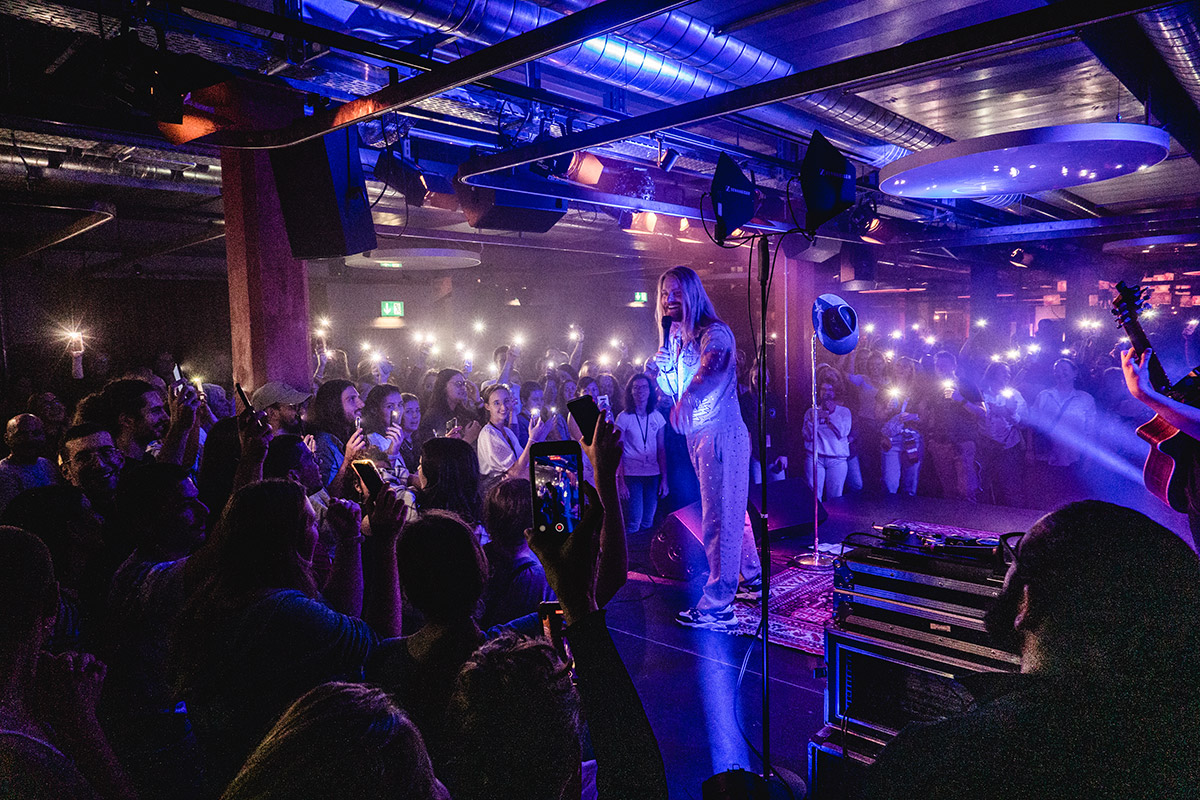 Sam Ryder during his first ever show in Zurich at a sold-out Papiersaal.

Indiespect: I read a really good article in The Guardian. I learned that you started playing music at the age of seven. You were part of quite a few bands. One of them was kind of a Glam Rock band. What did you take from that era?

Sam: The excitement. I love that kind of music. I'm a big fan of a lot of bands in that genre. Some that I thought I was a fan of I'm not necessarily anymore. Age does that to you. You like bands for the wrong reasons. But then some like Iron Maiden, they just get better with time. They're just an amazing band. What I take from that is the passion that the fans have for that genre of music. An Iron Maiden show in South America, you've seen nothing like it. The passion and the support is just Beatles-esque.

I still think that I have so much to learn, but the majority of what I learned about singing was done in weddings.

Indiespect: The initial show that made you thinking of an own music career was a gig of Sum 41. I could also hear that in your first band The Morning After. There were guitars like Iron Maiden and the singing style from Sum 41.

Indiespect: You also had a career as wedding singer. Was there a favorite song to perform?

Sam: I did loads of Motown. The whole vibe and esthetic of the wedding set and the band was Motown – and it was amazing. I'm a massive fan of Motown and soul music, so I sang a lot of Aretha Franklin, Whitney Houston, Stevie Wonder, Earth, Wind & Fire, The Four Tops, Tina Turner or Jocelyn Brown. It was the absolute best singing practice you could ever ask for. And I still think that I have so much to learn, but the majority of what I learned about singing was done in weddings. 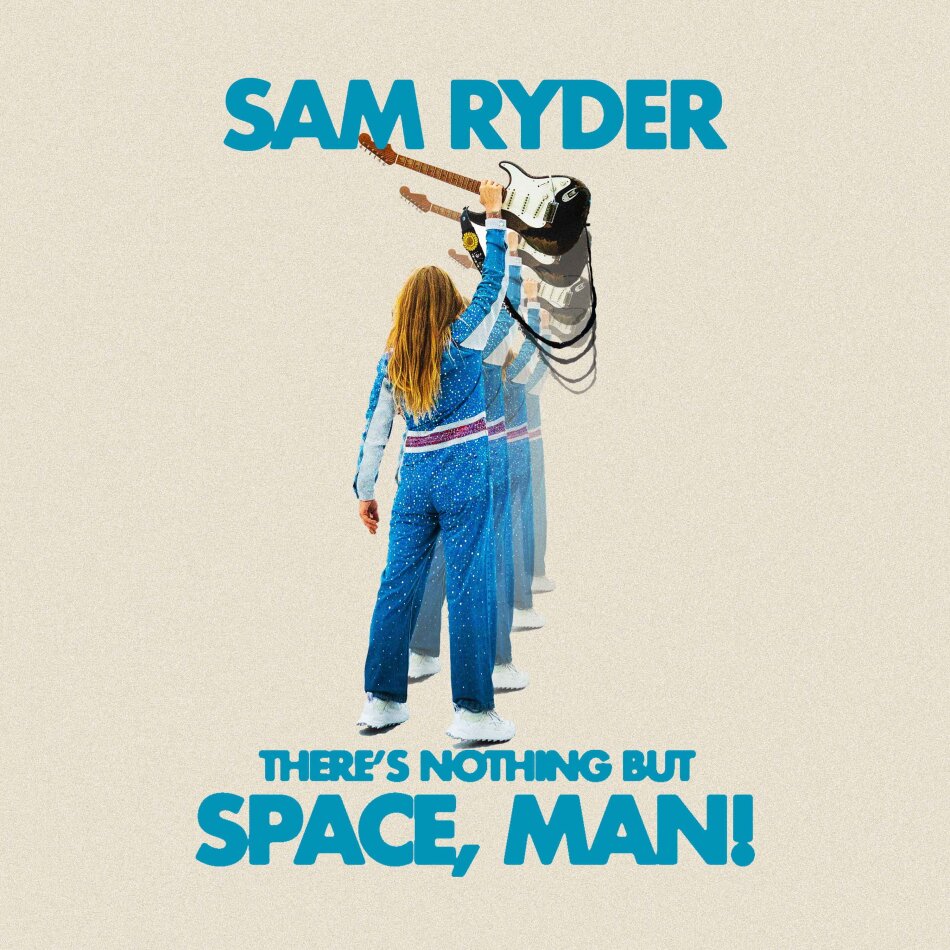 Indiespect: And also because you realized that people aren't necessarily listening to you and you just have to enjoy yourself?

Sam: That's the lesson I'm learning again at the moment. I find myself on stage trying to get back to the mindset that I was in when I was playing weddings, which is a lot more internalized, but still creating and evoking an emotional connection with the audience, but not dangerously getting to a point where I am expecting and hoping for praise from them. You've got to walk a fine line. I sing better or perform better if I internalize and for my own validation rather than outward validation. But at the same time, people are coming to see a show. They don't want to see some guy in his own world the entire time. That needs to be Freddie Mercury when he was working the crowd. People want that and they deserve it. They paid good money to be coming to a show. It's a tightrope walk and that is a life's work, finding that out.

Sam Ryder has learnt a lot during his time as a wedding singer.

Indiespect: You started your TikTok account during the pandemic. While other weren't able to perform, you were building your fan base. So for you it must've been one of the most important times.

A big viral video on social media of you singing, does that mean you're going to get 2 million people turn up to your gig? No, it does not.

Indiespect: How did it feel to transform from from having those fans to going on stage for the first time afterwards?

Sam: That's an incredible experience because you don't know. Social media is a funny world. We all live and breathe it, you know, all of us, whatever you're like. If you're an artist, especially, or in the industry. But it's not real life and you can never count on something being big on social media, to transfer in real life. A big viral video on social media of you singing, does that mean you're going to get 2 million people turn up to your gig? No, it does not. I've heard stories of people being huge on TikTok, like filmmakers, and they go and make a short film and have a premiere and 50 people turn up. And these are some of the most followed people on that app. It doesn't translate. So there is this intangible void that needs to be filled. 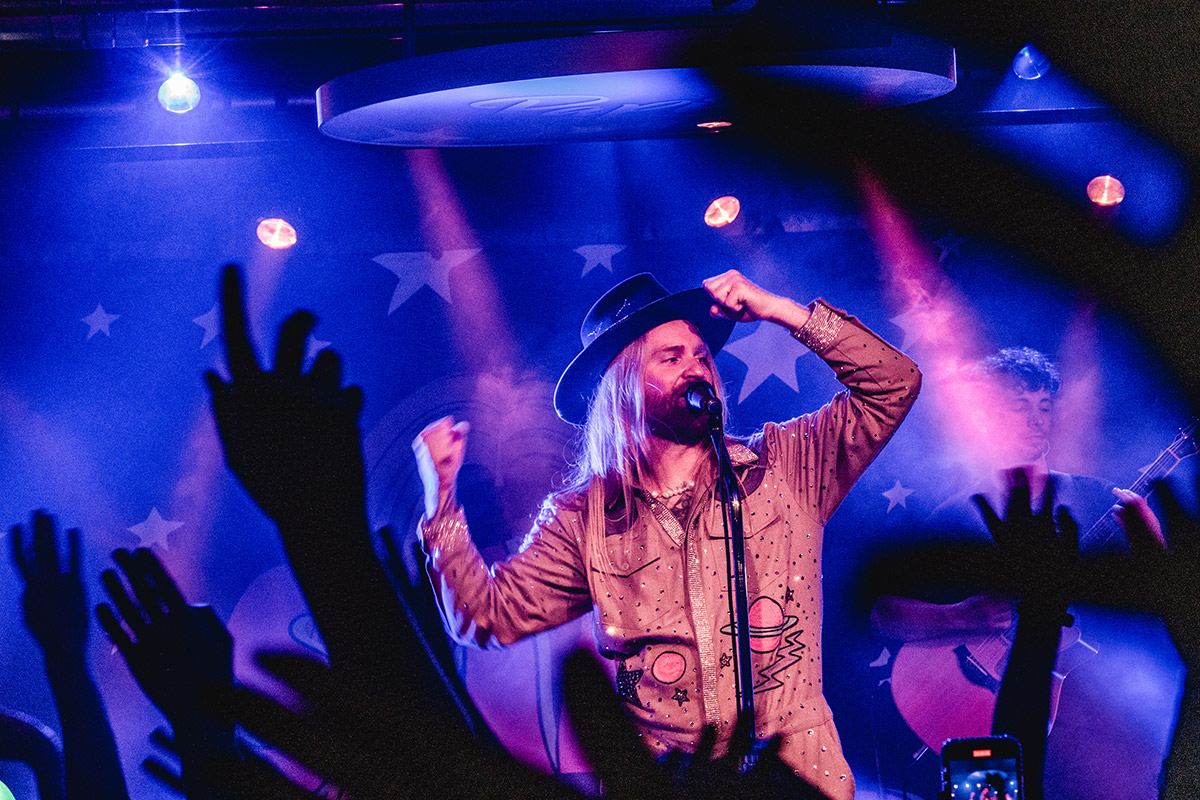 The Space Man became a Space Cowboy in Zurich.

Indiespect: Because of your success at the ESC you were able to play those special performances on the biggest stages. Is it hard for you to to play in such different ranges?

Sam: Yeah, it's a challenge. Playing in a stadium is an incredibly different way of playing. The sound of your voice, hitting the back wall of a stadium that is a football pitch and a half away, slapping against a concrete wall and coming back to you. These things are challenges that you will never have the experience of unless you do them for the first time ever. So yes, it's incredibly challenging and demanding. Then playing on TV... The challenges and obstacles of listening to yourself back on TV and it's sounding awful and horrible. Because TV sounds awful. There's no emotion. How many times have you seen or heard stories like this: Someone goes to Glastonbury and they watch someone's set. They're like: Oh my God, this is the best thing I've ever heard or seen. I'm totally absorbed in this moment. They go home, put on BBC and watch the highlights of Glastonbury. Then they think: this sounds awful. The same person, same set. But it doesn't transfer. So, all of these things are learning curves and they're incredibly tough to navigate.

These things are challenges that you will never have the experience of unless you do them for the first time ever.

Indiespect: You have to be ready for your soundcheck, so I got only one question left. Your hair is an important feature of your appearance. You even call yourself «samhairwolfryder» on your social media accounts. Do you have a secret to keep them so shiny?

Sam: I don't. I just have normal shampoo and conditioner. Nothing expensive, anything like that. I would say the biggest ally that you have for hair care is sleep and diet and vitamins, maybe even take vitamin supplements. Cold water showers as well. I never have hot showers unless I'm washing my hair. Maybe that helps, but god knows. I've got a lot of friends that do that, but they're bald, so who knows? (laughs)